Luke Stein is an AMBA ’23 candidate with a passion for strategy and analytics. His background lies in the telecom sector where he manages a team of strategy managers and analysts at Shaw Communications. In his various roles, he has developed and revolutionized the retention strategy for the Wireline business by combining pricing and packaging tactics with analytical models. In his blog post below, Stein reflects on his experience during his MBA study trip to Brazil.

Brazil is a magical place. From the moment I arrived, the vivacity and liveliness of the country was clear. My classmates and I returned home with newfound perspectives, strengthened relationships, and a deep appreciation for the resilience of the Brazilian people. Brazil stole our hearts and left an indelible impression. Sao Paulo and Rio de Janeiro live within all of us.

In recent years, Brazil suffered political turmoil under the rule of former president Jair Bolsonaro, which undermined the country’s growth and progression. Prior to our trip, Lula won one of the narrowest elections in Brazilian history and ousted Bolsonaro from office. Because of this massive political change and years of political and economic uncertainty, we were unaware of what to expect and how we would be received.

The kindness of the Brazilian people

Amidst this strife, the Brazilian people have been resilient and emanate a unique positivity in the face of hardship. Their friendliness and humility (and Google Translate) made it incredibly easy to have meaningful conversations about their lives and culture. Our willingness to learn from them was reciprocated with passion and warmth. Their ability to be warm and compassionate during times of uncertainty and hardship is a valuable lesson for all of us. It illustrates that above all, happiness is a choice. I have forged lasting friendships with many Brazilians who were some of the most welcoming people I’ve met in my life.

Economic and social development in Brazil

For our first excursion, we were fortunate enough to hear from a panel of speakers from the Federacao das Industrias do Estado de Sao Paulo (FIESP). These speakers cited the difficulties of growing the economy, rampant inflation in Brazil, and the need for change in the country to fuel social projects. Economic recovery in Brazil has been k-shaped, where low- and middle-income earners have been hit the hardest.

Our discussion evolved to examine Brazilians’ access to credit and the colossal amount of interest paid on outstanding balances. In January 2022, rotating credit interest reached 370.4 per cent. Over 77 per cent of Brazilian households are in debt with 28.5 per cent in default (source). These figures paint a dire picture. The ability to access and use credit is vital for economic growth and these credit policies drastically impact household savings.

They did reinforce, however, that Brazil has an incredible amount of opportunity. Abundant natural resources, a young population, and growth in key sectors are all major catalysts for future economic growth.

Following the violent storm that struck Rio de Janeiro in 2010, the municipality built an operations centre to manage crisis situations. This centre has become a benchmark for city operations around the globe. We were struck by the city’s ability to collaborate, share intelligence, and use data to improve its day-to-day management. The ability to innovate so profoundly with limited access to resources provides a key learning: innovation can originate from anywhere.

Back to the spirit of the Brazilian people. During our backstage tour at Samba City, we immersed ourselves in the Brazilian carnival scene. Every year, the Carnival in Rio De Janeiro has two million attendees and is considered the largest carnival in the world. Walking through the production facilities and learning about how the floats were crafted was an unforgettable experience. Samba is deeply embedded in, and is a foundational part of, Brazilian culture. The happiness and liveliness of the dance is a beautiful reflection of the people who live there.

Also, please don’t ask me to Samba. I tried and failed.

Brazil, and its people, have an unbelievable amount of experience, resilience, innovation, and passion to offer. I returned as a different person – my attitude and mindset forever shaped by my time there.

Thank you, Brazil, for everything you offered and for all you taught us. Our admiration for your beautiful country is etched into our souls.

See below for more photos from the trip. 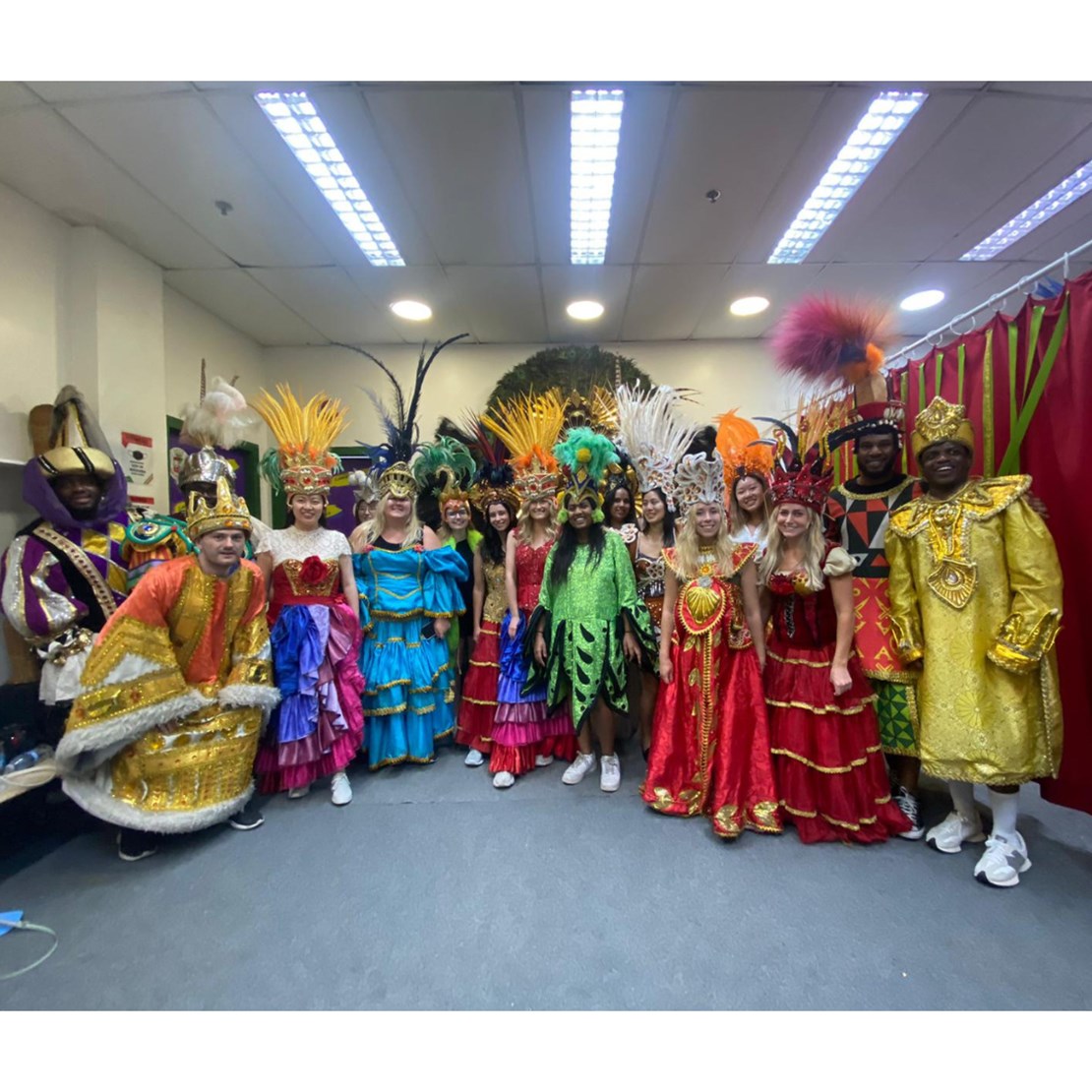 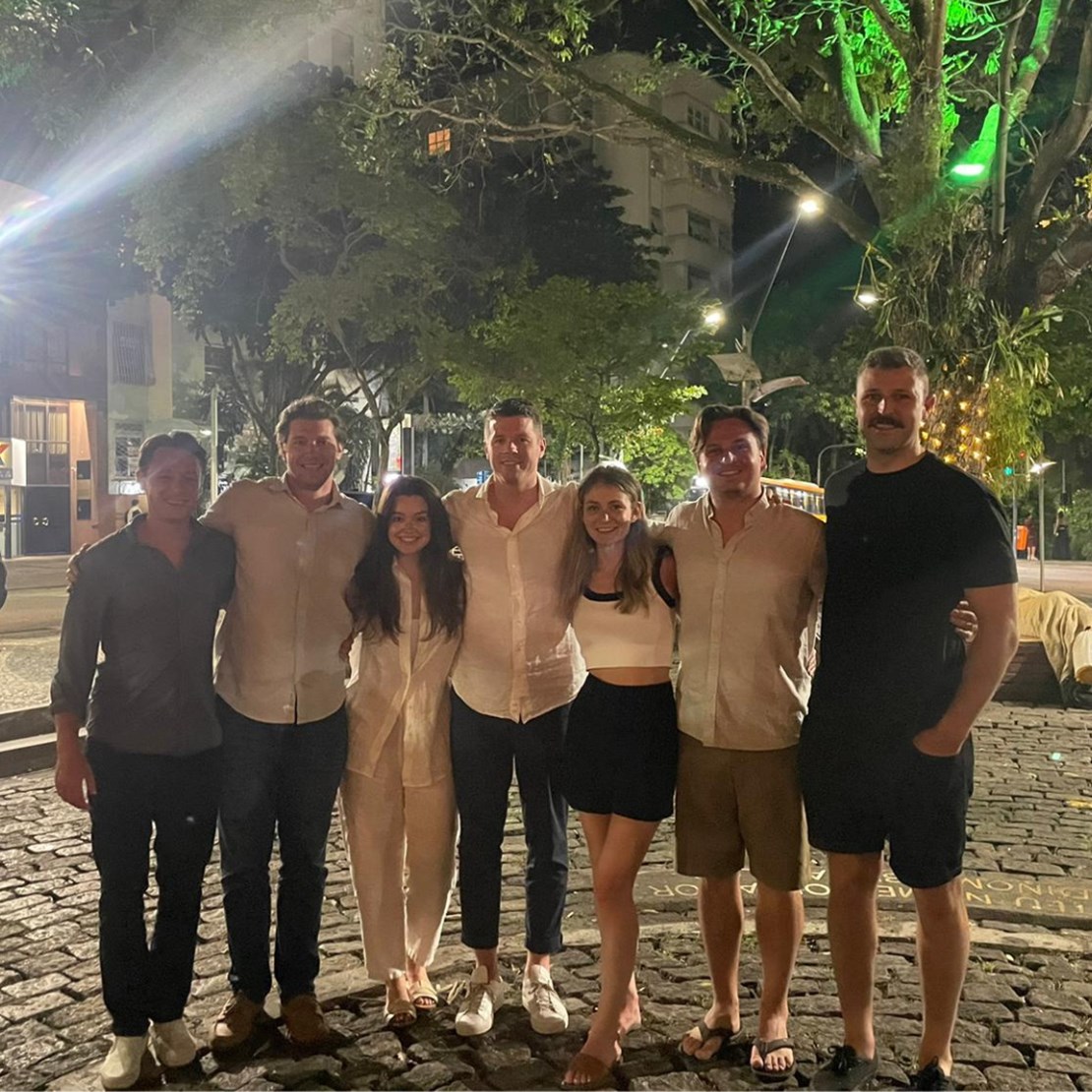 Group photo at night in Brazil 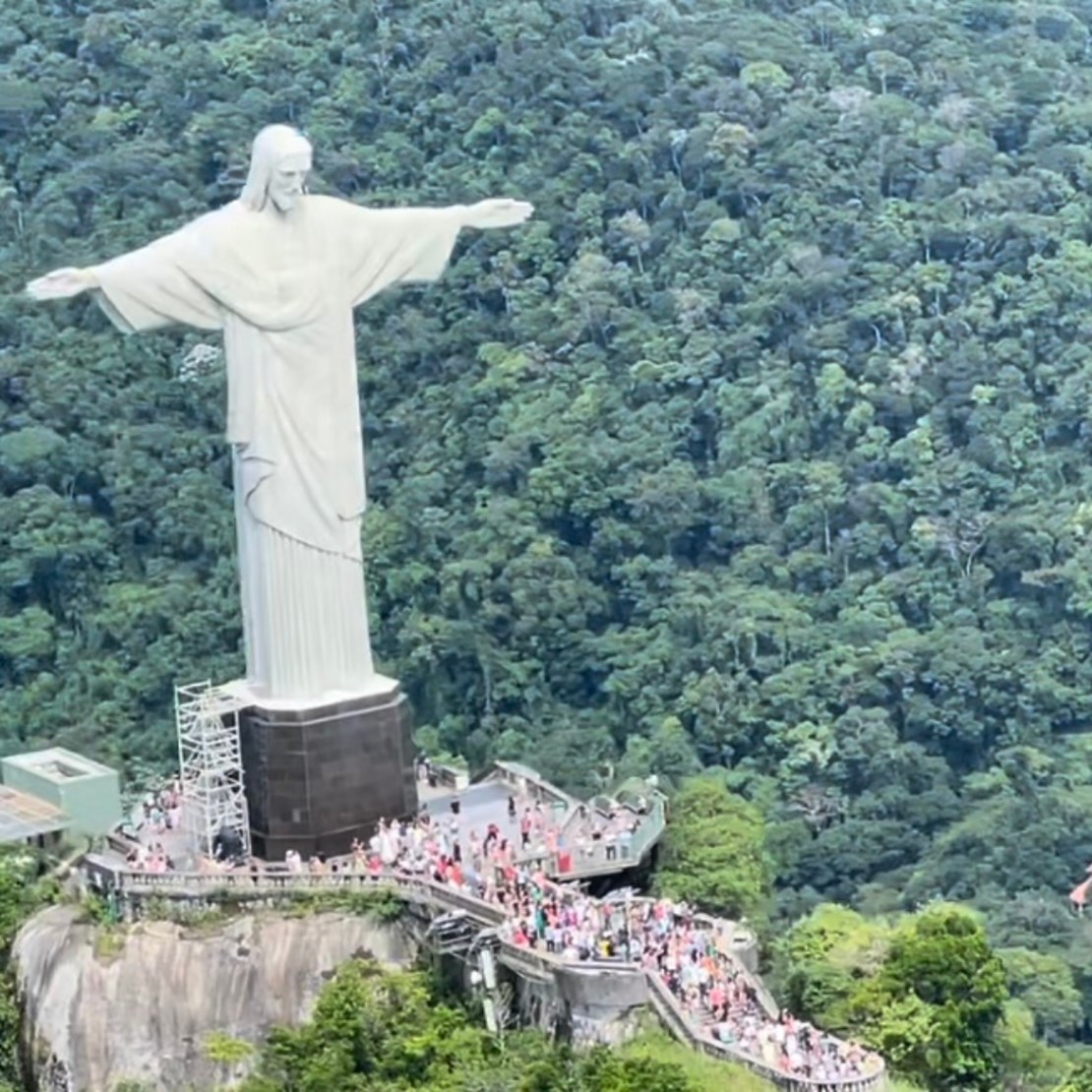 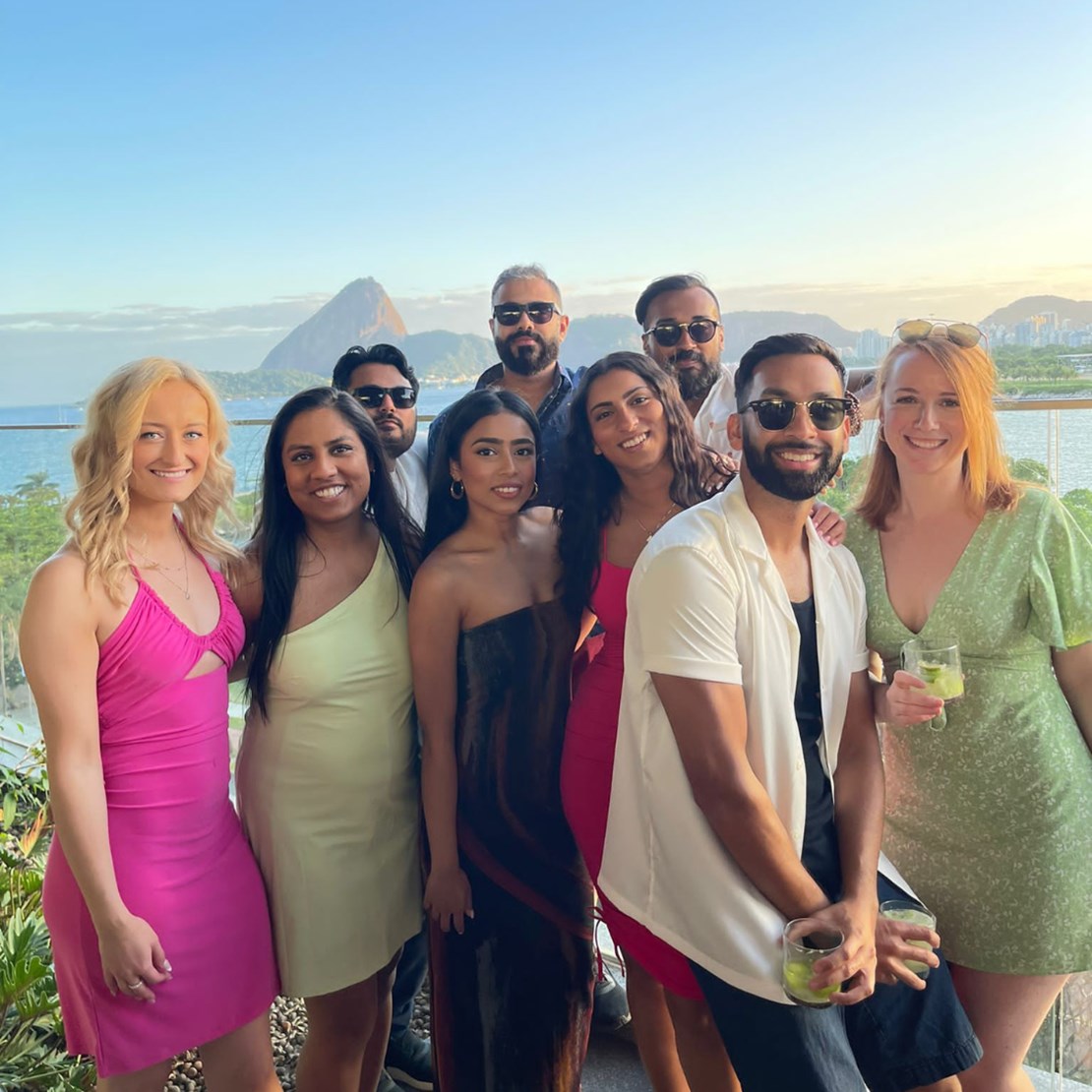 Group photo with a great view 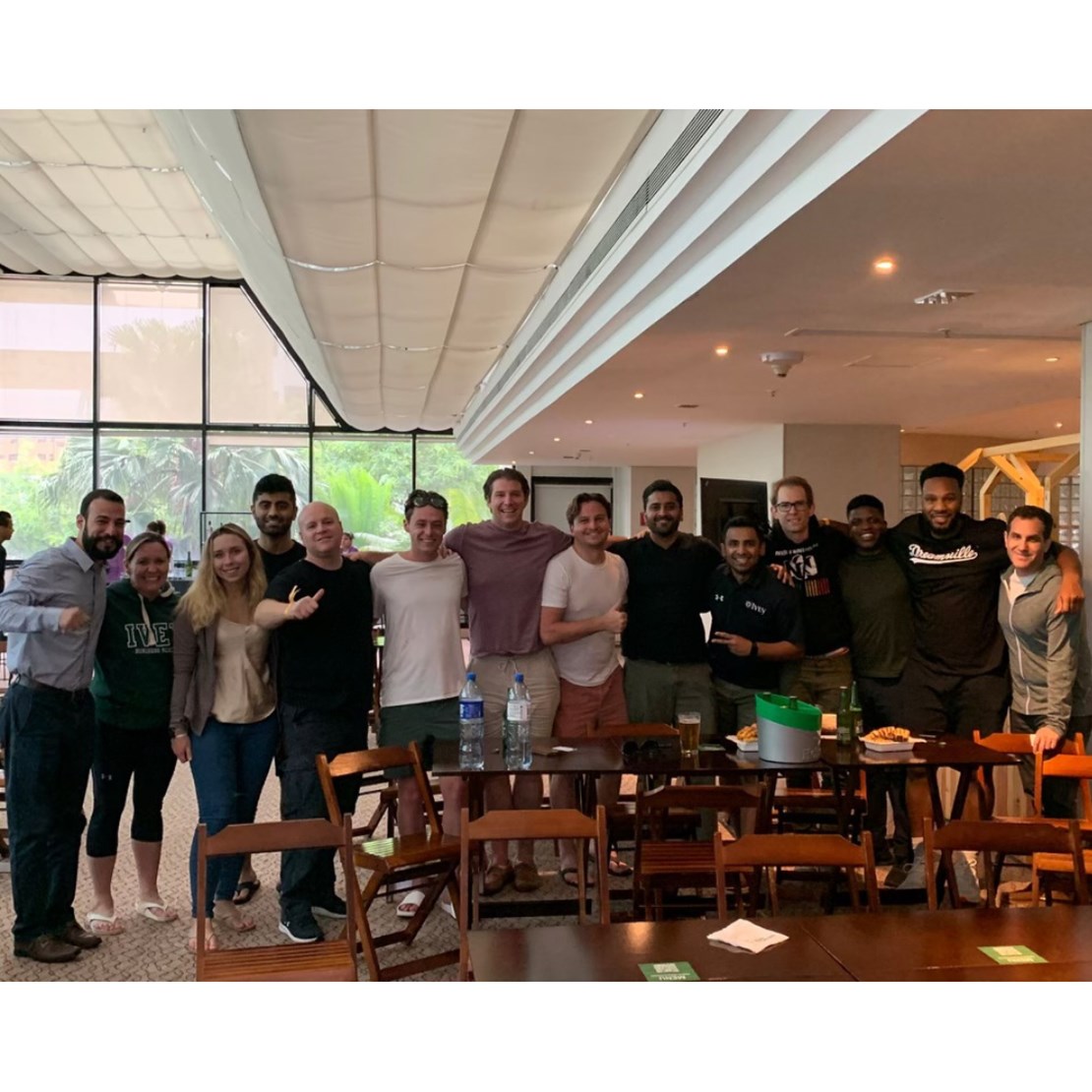 Group photo of some of the AMBAs 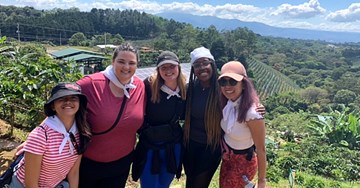 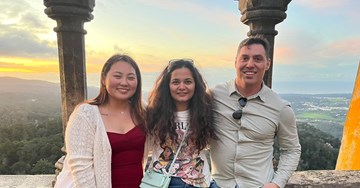