Engagement, volunteerism and revenue often represent the major challenges faced by any not-for-profit organization. When tackling these issues, finding a consulting team that is both effective and free of charge would seem like a dream come true for non-profits.  That’s where the Ivey business students came in.

Ivey HBA students worked with local not-for-profits since the beginning of October as part of the Ivey Connects Community Consulting Project (CCP), a business consulting program run by students at Ivey Business School with support from management consultants from Accenture.

Victoria Lin, HBA ’17, first got involved with AIESEC when she went on an exchange to Budapest, Hungary, last summer.

“That’s why I was so intrigued when I saw the non-profit organizations that CCP offered,” said Lin. “I immediately knew that I wanted to work with AIESEC.”

The four students looked at ways to leverage AIESEC Canada’s alumni network. Lin pointed out that the organization just didn’t have the resources to develop a plan going forward. The HBAs offered a solution to that problem. As a team, they conducted numerous interviews with similar organizations to AIESEC such as Shad Valley, Ivey alumni, and local AIESEC chapters like Western University and York University, to asses alumni engagement strategies and kick start their action plan.

“At Ivey, we focus on the case method, but you don’t actually get to participate in a case yourself,” said Lin. “So this project was interesting in that this is a real-world problem, and we get to act on it.”

Teammate Ilia Khairetdinov, HBA ’17, shared what the experience with CCP and AIESEC meant to him on a personal level.

“I think it is really important to work with people who are different than you because they think and act differently,” said Khairetdinov. “You both face the same problem but you approach it from distinct angles.”

The overall experience was an extremely positive one for Khairetdinov, but the highlight for him and his team is that their final project is now in the process of being implemented by a newly hired professional team at AIESEC Canada.

The Parkinson Society of Southwestern Ontario (PSSO) student team included Kevin Chang, Stephanie Harris, Anita Lin, and Ayush Vaidya. They were responsible for developing a marketing strategy to address the decreasing revenues of the SuperWalk event. The SuperWalk is an annual walk held on September 10th and 11th across the regions in Southwestern Ontario to raise money and awareness for PSSO.

Chang, HBA ’17, found the additional guidance provided by Accenture consultants, who were assigned to each team, to be invaluable.

“We were very lucky to work closely with the Accenture advisors,” said Chang. “They taught us everything from building client relationships, to creating a PowerPoint deck and a structured story line. Now I can confidently bridge the gaps between the cases taught at Ivey and a real-world problem.”

In addition to working with the Accenture consultants, the teams were also in direct contact with an employee at their respective non-profit organization.

Steve Hickson, Special Events Coordinator for the Parkinson Society of Southwestern Ontario, applauded the students for their efforts on the SuperWalk marketing plan.

“Working with the Ivey students has been great,” said Hickson. “They are asking good questions and tough questions that make us look at the event from a different perspective.”

“We both learned how to broaden our perspectives,” said Lin. “I feel that PSSO began to see value in using technology for focusing on the power of online donations. And for myself, I learned to look at problems with a broad focus. In the beginning of CCP, we focused on a key issue without considering the other underlying issues that attributed to their problem. Without understanding the scope of the problem, it was difficult to address it.”

The results of the Community Consulting Project prove that, even at this early stage of their training, student leaders can deliver a useful impact on the business community – a win-win situation for all concerned. 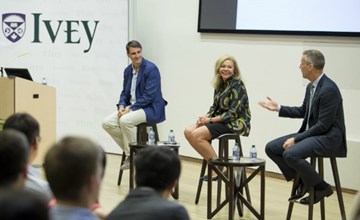 Good leaders learn: HBA1s get a first-hand look at lessons in leadership 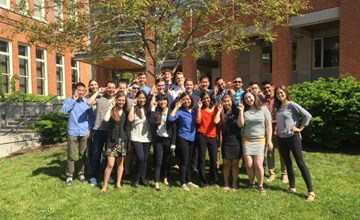 HBA ’15 graduates venture down the road to entrepreneurship 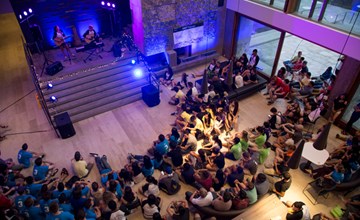