Warren Buffett may be one of the best-known investors and richest persons in the world, but for the Ivey students who had a chance to meet him recently, his real wealth came in the form of inspirational advice.

The 20 HBA and MBA students who travelled to Omaha, Nebraska, for a visit with Buffett on February 27 had an inside look at Buffett’s life. The trip included a tour of the Nebraska Furniture Mart, which is a subsidiary of Berkshire Hathaway Inc., the multinational conglomerate holding company operated by Buffett, and a two-hour question-and-answer session. It also included lunch with Buffett at his favourite restaurant, Piccolo Pete’s. Although students from seven U.S. schools were also there, Ivey was the only Canadian school invited. Ivey students are accepted for the trip on a first-come, first-served basis.

Whether hearing Buffett’s thoughts on women’s rights, social media, and philanthropy, or learning about his surprising lack of interest in money, there were many takeaways from the experience. HBA student Lynn Hu and MBA student Ryan Nelson shared their personal reflections on the trip.

Lynn Hu, HBA ’15: Lessons on investing, wealth, and the true meaning of life

Instead of an insatiable quest for money, value investing has often been described as a spiritual path of humility, discipline, and patience. And Warren Buffett has demonstrated the highest level of all three qualities. As a fellow disciple of [Ben] Graham and Buffett, being in Buffett’s presence was a transformational experience for me.

Not unlike his media appearances, Buffett was extremely down-to-earth, and patiently answered students’ questions with thoughtfulness and humour. He kindly shared words of wisdom on his investing philosophy, income inequality and women’s rights, and his philanthropic passions.

Considering Buffett’s aptitude and intelligence, I was surprised by how frequently he admitted what he does not know. He stressed the importance of knowing the parameter of one’s circle of competence, and he prefers simple businesses over complex ones. For example, despite being a great mentor and friend of Microsoft Co-Founder Bill Gates, he acknowledged his lack of insights on Microsoft’s long-term performance.

The contradictions extend further. Despite being a great investor and the second wealthiest person in the world, Buffett displays little interest in money in the traditional sense. He lives in the same house he bought in 1958, and drives a modest Cadillac (which I was fortunate enough to ride in with him to the restaurant). When asked about his philanthropic work, pledging 99 per cent of his wealth to the Bill & Melinda Gates Foundation, he instead responded that he had in fact given away nothing – the money he earned serves zero value for him and his family, but is of tremendous value for those in need.

Most memorable for me, was his definition of success. Buffett defined success not by how much money you earn, but how many people would hide you. He told us about an elderly Holocaust survivor he befriended years ago who measures the trustworthiness of others by their willingness to hide her.

Meeting Buffett in person has solidified my dedication to value investing in a profound way. Not only did he teach us how to invest successfully, more importantly, he showed us how to live meaningfully.

We had the privilege of meeting Warren Buffett a mere day before Berkshire Hathaway was set to release its 50th annual shareholder letter. Prior to meeting him, we set off to explore one of his earliest acquisitions: Nebraska Furniture Mart (NFM).

During our tour of this state-of-the-art warehouse, distribution and retail centre, three components of Berkshire’s acquisitions strategy crystallized. First, the 1983 acquisition of NFM represented Berkshire's laser-like focus on superior business models with self-evident “moats.” Second, the autonomy provided by Berkshire to NFM Founder Rose Blumkin, universally known as “Mrs. B”, and her team helped reinforce a view that significant growth could be realized without undue investor influence. Finally, the handshake deal between Buffett and Mrs. B implied Berkshire’s sincere willingness to trust and work with first-class people.

Buffett’s meeting with 160 students from a variety of schools took place in the Cloud Room, a large wood-paneled meeting room located on the top floor of Berkshire's headquarters. The dynamic of the room changed palpably when Buffett walked in, opened a Cherry Coke, and welcomed us to Omaha. He then spent two hours insightfully speaking to us on a range of topics including: the importance of recognizing one's circle of competence, the thoughtful process of succession planning at Berkshire, and his belief that gender should not play a role in the determination of senior management. Below are a few comments that were particularly striking.

“I love it when other people are doing things that are unproductive."

[On recognition that investments are risk-less in the long run]

“Volatility is not synonymous with risk, at all!”

[On women in leadership roles]

“Until the 1920s, we were using half the talent. Just think what America could do using all of the talent available.”

One of the deepest moments of the session was when Buffett recalled an anecdote about a female Polish immigrant he had met. This woman had lived through the Second World War and, because of this experience, had a unique barometer when evaluating trustworthiness in others. In reference to her experience during the war, she would ask herself, “Would this person hide me?” Buffett then took on a grave and serious tone and told us he is successful, not because of the wealth he has accumulated, but because he has developed deep and lasting relationships with people that would hide him. These are the people you want in your life.

This experience will leave a deep impression on each student's views of leadership, courage, and success.  While I can only speak to the moments that most affected me, the breadth and depth of experience that Buffett drew on will likely leave all the students attending with their own unique and profound memories. 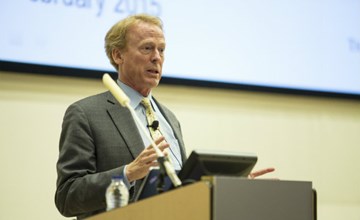 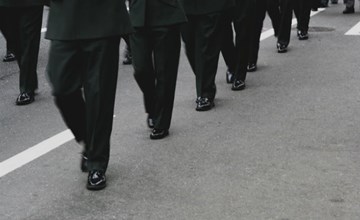 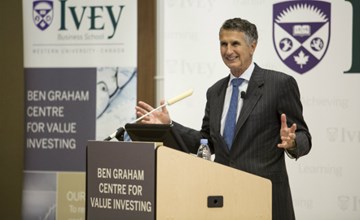