The choice was clear for two-time gold medallist Olympian Cheryl Pounder. She chose to engage.

Pounder competed in the 2002 Winter Olympics in Salt Lake City, Utah, and the 2006 Winter Olympics in Turin, Italy, winning the gold medal for Canada both years in women’s hockey. She spoke to the senior leaders of the Ivey Executive Program at the Ivey Spencer Leadership Centre after an invigorating day of dragon boat racing with teambuilding experts PaddleCore.

Pounder delved into her experience as a professional female hockey player on the journey to excellence – a process that requires engagement, passion, teamwork, and leadership.

Pounder found her passion for hockey as a young girl playing with her brother on the streets of Mississauga.

“That’s why you’re all here,” said Pounder. “Passion. You have a passion for something, and you want to grow. And for me, my passion was for this sport that girls were not supposed to play. But I engaged it.”

Find your value and confidence

At age 16, Pounder was invited to take the place of an injured veteran during training camp and tryouts for the National Team. Pounder saw this opportunity as a chance to grow, but she soon became discouraged.

Her teammates couldn’t be bothered to get to know her, and as a result, it affected Pounder’s confidence and value, which in turn affected her performance on the ice. It was not until a teammate finally took the time to help and include Pounder that her confidence and value increased.

“Now I felt like I was part of something. And all of a sudden, my performance increased. I knew I wasn’t going to make the team,” said Pounder, “but now I was proud of my performance, and I played well above what I thought I was capable of.”

Much to her surprise, Pounder made the National Team that year. She asked herself, how did this happen? To answer that question, Pounder reminded her listeners that it’s crucial for us to take the time to learn from reflection. First, Pounder seized the opportunity. “In life we’re given opportunities and we either seize them or we don’t,” said Pounder. “But I had to be ready for that moment. I was ready, and I seized it.”

And second, “Someone helped me. We don’t always see the impact we have on others, but we do so by our actions every day.”

In training for the Winter Olympics, Pounder looked back on her time at a 29-day training camp. During the last four days of training, Pounder and her 28 teammates had to cycle around Prince Edward Island in small groups, stopping only to take rest at night in tents that they had to set up themselves.

Pounder and her teammates decided to take turns leading the group and staying at the back of the pack. Pounder noted that there is always someone “in the middle of the group,” either having a bad day or a personal or physical struggle.

“We help each other because each of us has a moment where we’re in the middle,” said Pounder. “I believe our Olympic gold medal was won on the bike path in PEI, almost a full year before we set foot at the Winter Olympic Games.”

With moments of great success come moments of fear and doubt. In preparation for the 2002 Winter Olympics, Pounder found herself in fear of failure. Her push to stay motivated came when she received a note from a previous coach that read, “Success is not the result of spontaneous combustion. You must set yourself on fire.” And fittingly, the 2002 Olympic slogan was “Light the fire within.”

When we push through our fears and doubts by lighting the fire within, we must then take the time to celebrate our successes. “Often, when we sail by our milestones, it becomes very difficult for us to stay engaged,” said Pounder.  “Let’s remember to take the time to savour the moment and appreciate what has been accomplished.”

“We have to enjoy what we do, and we have to enjoy the process,” said Pounder. “We must grow for gold, not go for it. Each and every day is an opportunity to grow towards gold.”

Pounder’s two Olympic gold medals came as a result of the process of engagement, passion, teamwork, and leadership – A process that prepared her to grow for gold. 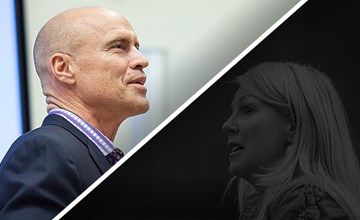 Mark Messier and the attributes of leadership 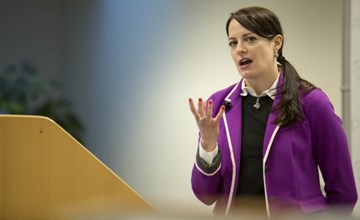 Kelly Fitzsimmons - Zombies, pedestals and the path to leadership 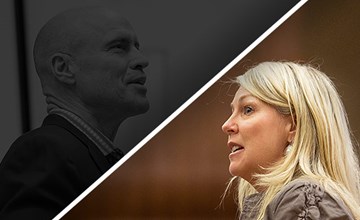