Elliot Kimelman, an HBA ’20 candidate, will appear on the CBC television show Dragons’ Den on November 14 at 9 p.m. (Eastern Time). He'll be pitching his product, C-Spray, a chlorine-eliminating multi-use spray for swimmers. He pitched before the Dragons in May in Toronto and has just learned the segment was selected for the show.

“I used to watch Dragons' Den religiously as a child and never dreamed I would one day be on the show,” he said. “This experience has been extremely encouraging for me as an entrepreneur, and has helped to inspire me to start another business.”

Since his pitch, Kimelman said C-Spray sales are increasing and he has been building relationships with distributors and retailers. He is currently working on his next business idea.

Learn how it all started. In the article below, Kimelman discusses his entrepreneurial journey – from the birth of an idea to meeting the Dragons.

When it came to promoting his chlorine-eliminating multi-use spray for swimmers, Elliot Kimelman didn’t hesitate to dive into the pool of opportunity.

The HBA ’20 candidate even pitched his product, C-Spray, before some of the toughest critics – the Dragons from the CBC television show Dragons’ Den.

His pitch was filmed at a CBC studio in Toronto on May 11 and could be selected for the show.

Regardless of the end result, he said it was an unforgettable experience that he’d encourage any budding entrepreneur to pursue.

“When opportunities arise, you should take them. I thought it was a once-in-a-lifetime chance so I might as well take a risk and try,” he said. “I’ve learned that the biggest things in life – some of the most successful things you might do – are the ones that require you to take the most risk.”

The making of an entrepreneur

Kimelman’s entrepreneurial start came by accident. He was a swimming instructor in high school and noticed the pool’s chlorine was irritating his skin. Showering afterward didn’t help enough because chlorine can be absorbed into skin, hair, and fabrics so effectively that soap and water won’t remove it. So he researched how to neutralize chlorine and created a concoction of vitamin C and other naturally occurring minerals and salts to reduce chlorine’s effect on hair, skin, and swimwear. He later named the invention C-Spray.

While taking part in an entrepreneurship program with Junior Achievement of Manitoba in high school, Kimelman’s student team developed a C-Spray prototype and sold it at trade fairs.

Kimelman then went on to study business at Western University where he was inspired by many of the cases he studied in Business 1220 and 2257. In the summer of 2018, just prior to starting Ivey’s HBA Program, he incorporated a business to sell C-Spray on Amazon and through some retailers.

His focus on C-Spray waned during the first-year of HBA until he learned in March 2019 that Dragons’ Den had open auditions in Toronto. He auditioned and was selected from thousands of people to pitch before the Dragons during the May filmings. He brought along a friend from Winnipeg, Jillian Daien, and two friends from Western University – William Wang and Forrest Lin, an HBA and Engineering ’20 candidate – to participate as swimwear models. His family, including his grandmother, also flew in for his big day.

“It was a really fun experience, just being there in front of all the cameras and actually talking to the Dragons. I feel very privileged and honoured,” he said. “It felt very Hollywood.”

Kimelman said the public speaking opportunities and case competitions he experienced in Ivey’s HBA Program helped to prepare him to speak before such an audience.

“Ivey taught me to be fearless and to not let people distract you from a goal. It prepared me to have the confidence to stand up on TV,” he said. “It was really exciting to use the tools I learned in school to do something that was very real life.”

And while Kimelman can’t reveal what came about from his pitch or what’s next for C-Spray, he can share some insights from the experience. Here’s his advice:

“I’ve learned that in business, confidence is everything. You can have the best product and the best pitch, but if you don’t have an air of confidence, no one is going to trust you with their money,” he said. 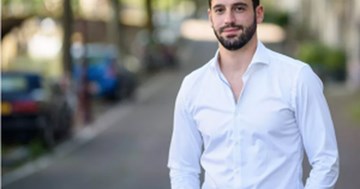 Rob Khazzam, HBA '09, Uber Canada's GM, has scaled the business and himself