To celebrate Black History Month, the Black Students at Ivey Collective (BSIC) has been highlighting moments, figures, and businesses in Black Canadian History.⁠

Each week, they shared information about businesses, biographies, art, and not-for-profits that were created by or empower Black Canadians. Swipe through some of the social posts below and view the full profiles on our BHM 2022 Instagram highlight.

A message from Duke Osei and Divine Nwaokocha, HBA students and Co-Presidents of the Black Students at Ivey Collective: 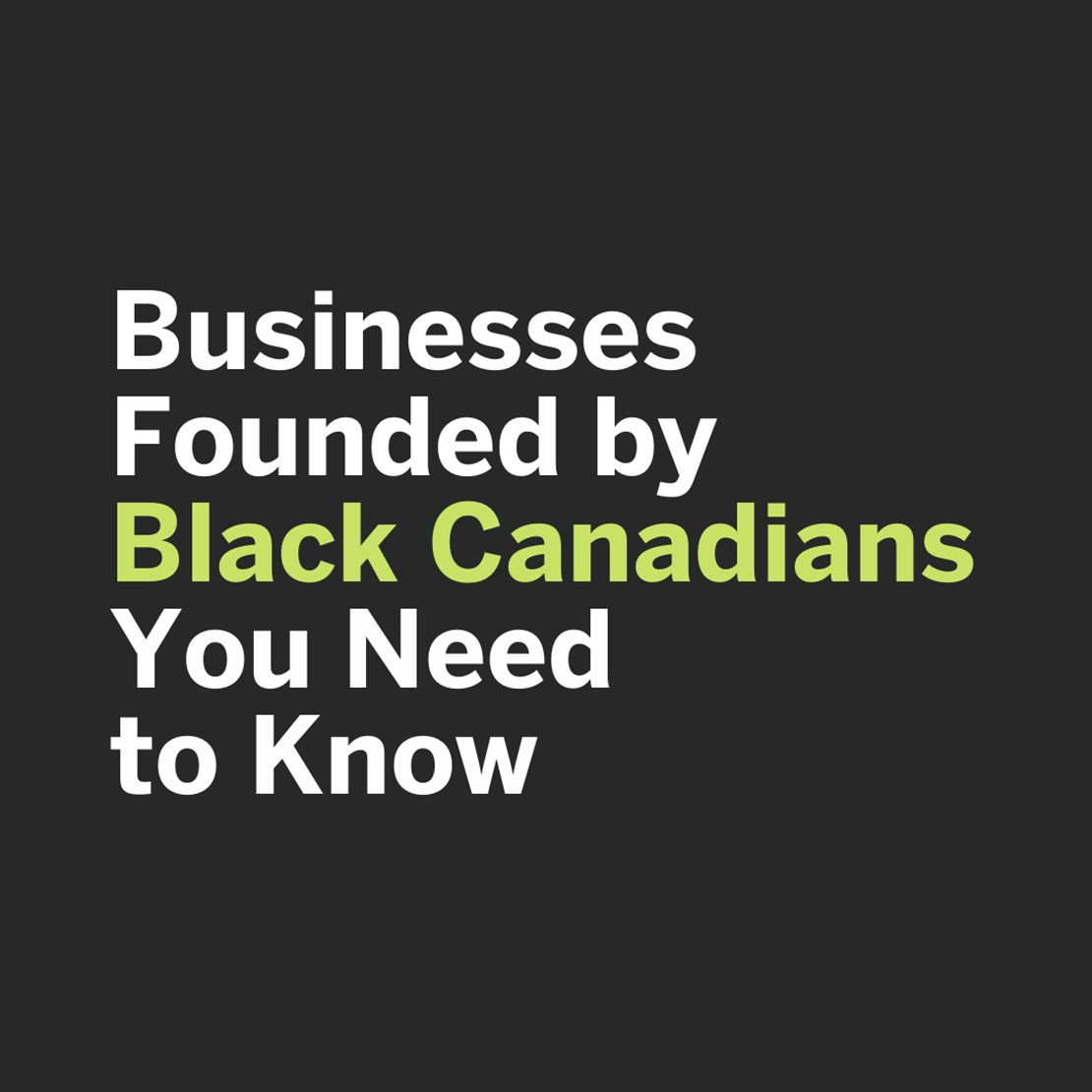 Businesses Founded by Black Canadians You Need to Know

The first week's theme was businesses founded by Black Canadians. Swipe through to learn more. 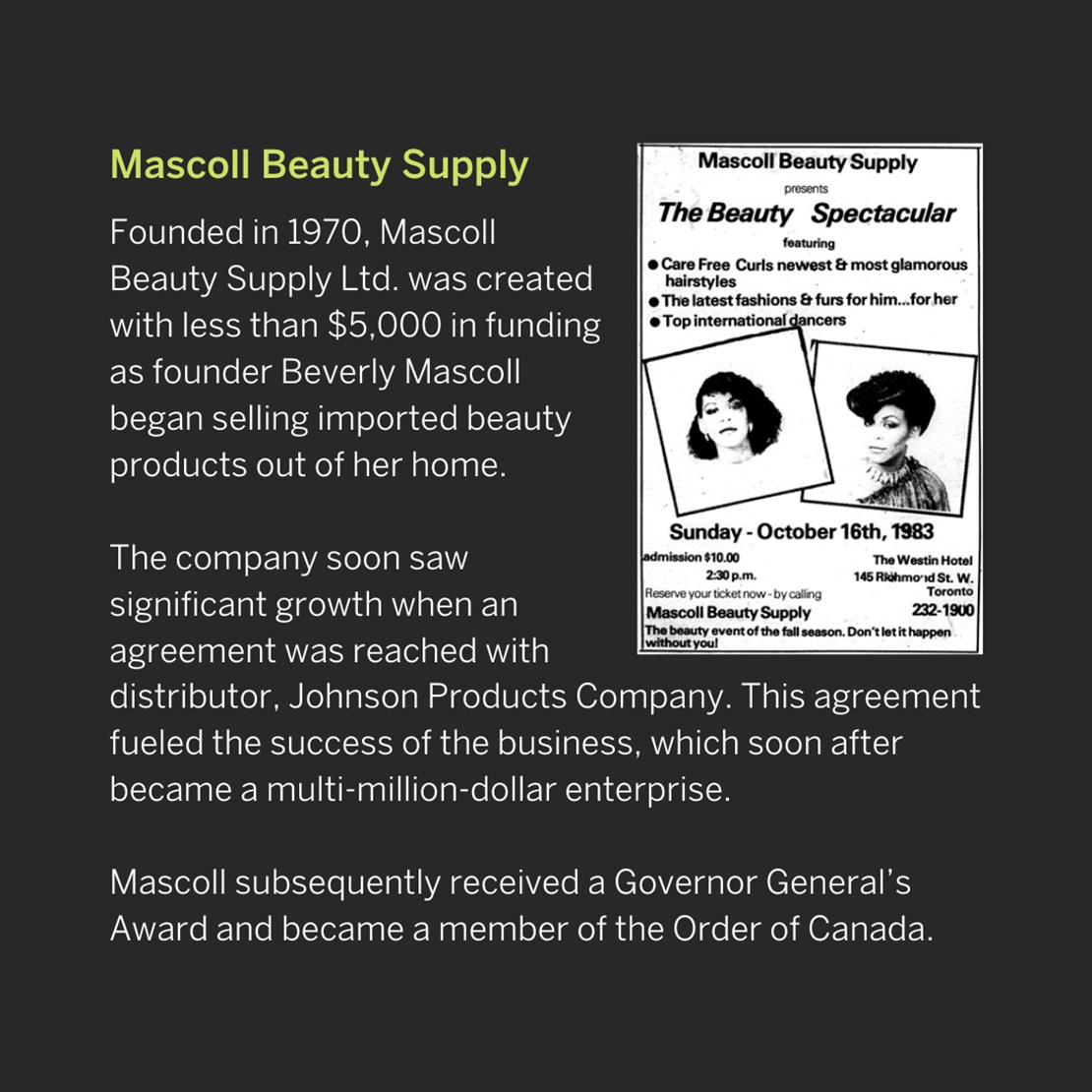 Founded in 1970, Mascoll Beauty Supply Ltd. was created with less than $5,000 in funding as founder Beverly Mascoll began selling imported beauty products out of her home.

The company soon saw significant growth when an agreement was reached with distributor, Johnson Products Company. This agreement fueled the success of the business, which soon after became a multi-million-dollar enterprise.

Mascoll subsequently received a Governor General’s Award and became a member of the Order of Canada. 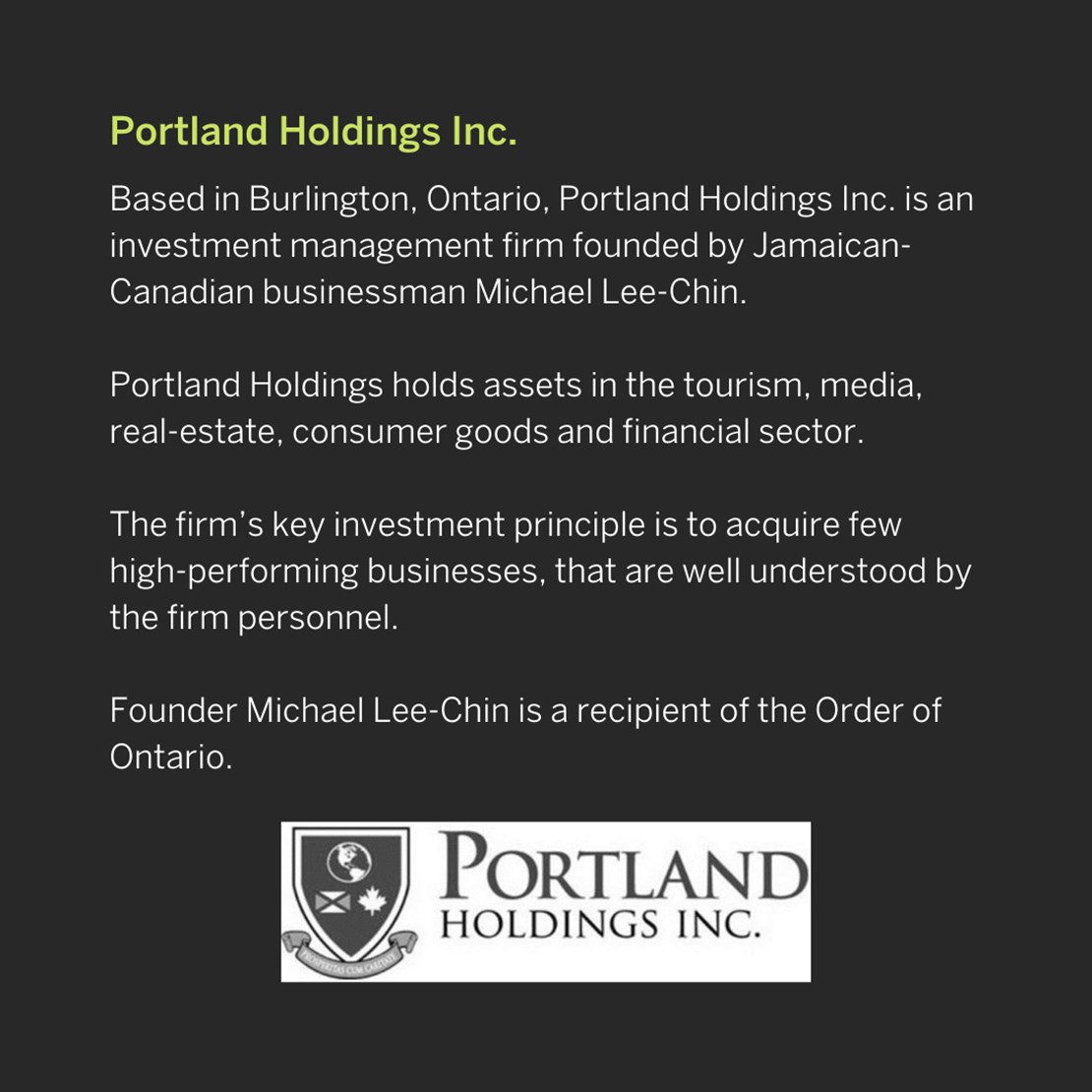 The firm’s key investment principle is to acquire few high-performing businesses, that are well understood by the firm personnel.

Founder Michael Lee-Chin is a recipient of the Order of Ontario. 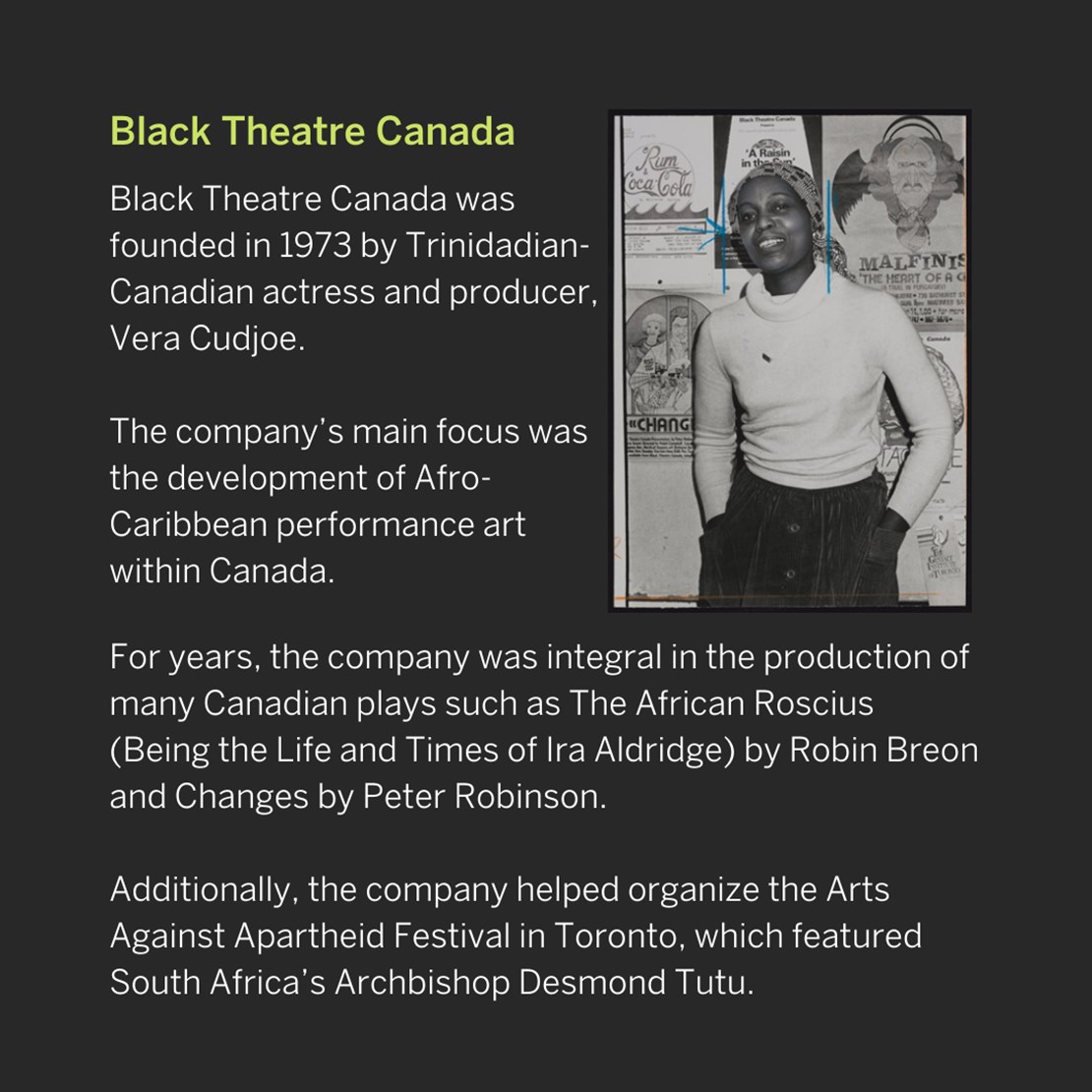 Black Theatre Canada was founded in 1973 by Trinidadian-Canadian actress and producer, Vera Cudjoe.

The company’s main focus was the development of Afro-Caribbean performance art within Canada.

For years, the company was integral in the production of many Canadian plays such as The African Roscius (Being the Life and Times of Ira Aldridge) by Robin Breon and Changes by Peter Robinson. 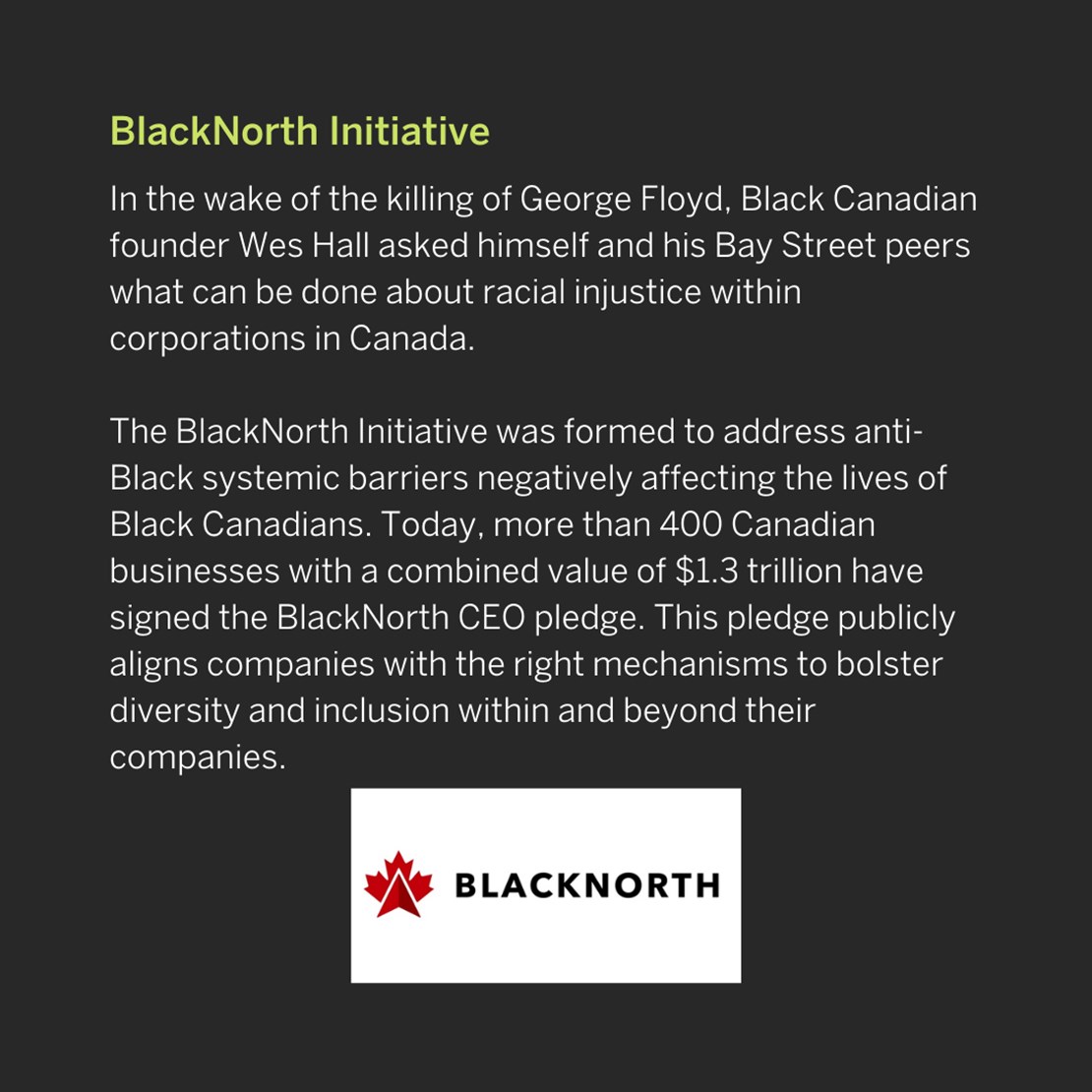 In the wake of the killing of George Floyd, Black Canadian founder Wes Hall asked himself and his Bay Street peers what can be done about racial injustice within corporations in Canada.

The BlackNorth Initiative was formed to address anti-Black systemic barriers negatively affecting the lives of Black Canadians. Today, more than 400 Canadian businesses with a combined value of $1.3 trillion have signed the BlackNorth CEO pledge. This pledge publicly aligns companies with the right mechanisms to bolster diversity and inclusion within and beyond their companies. 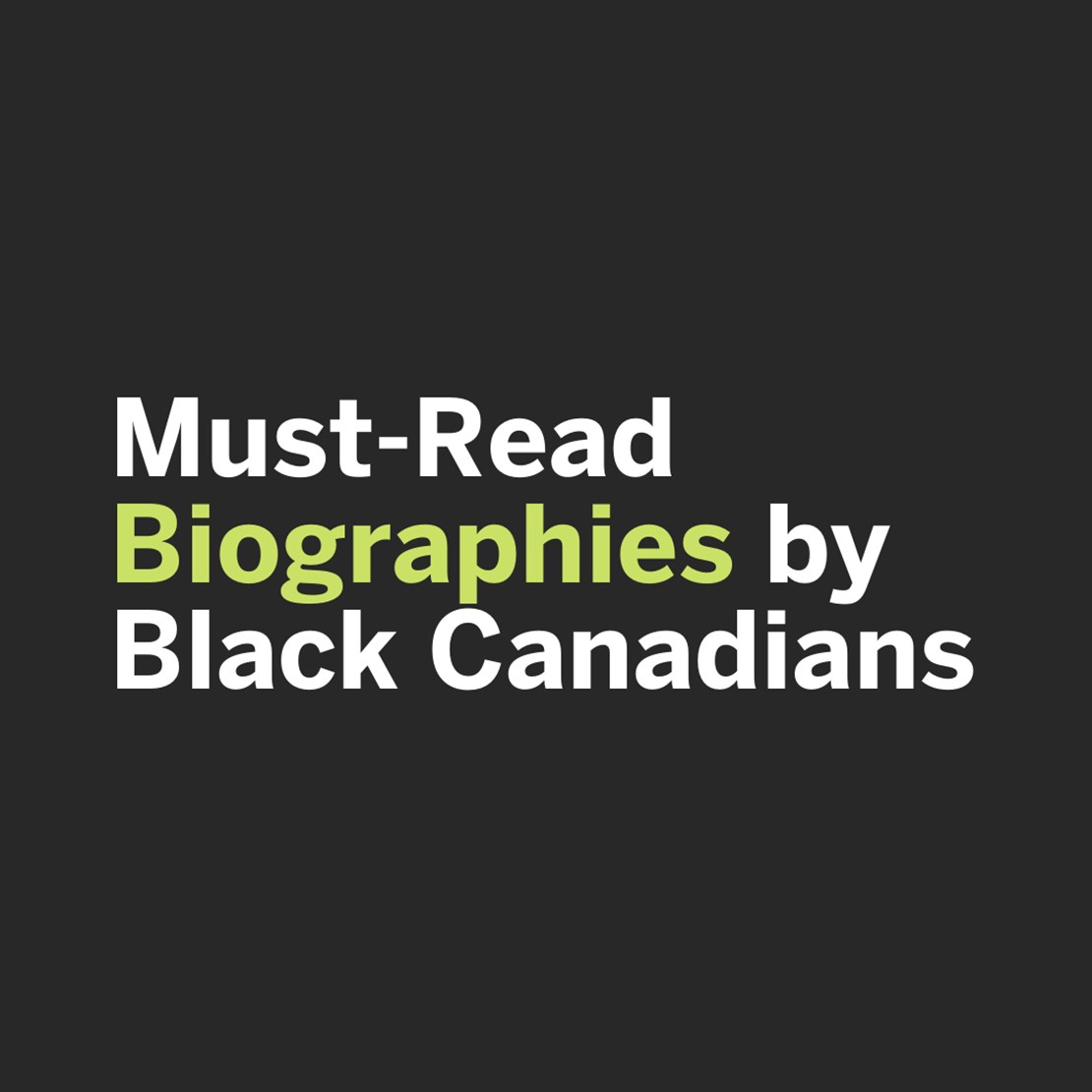 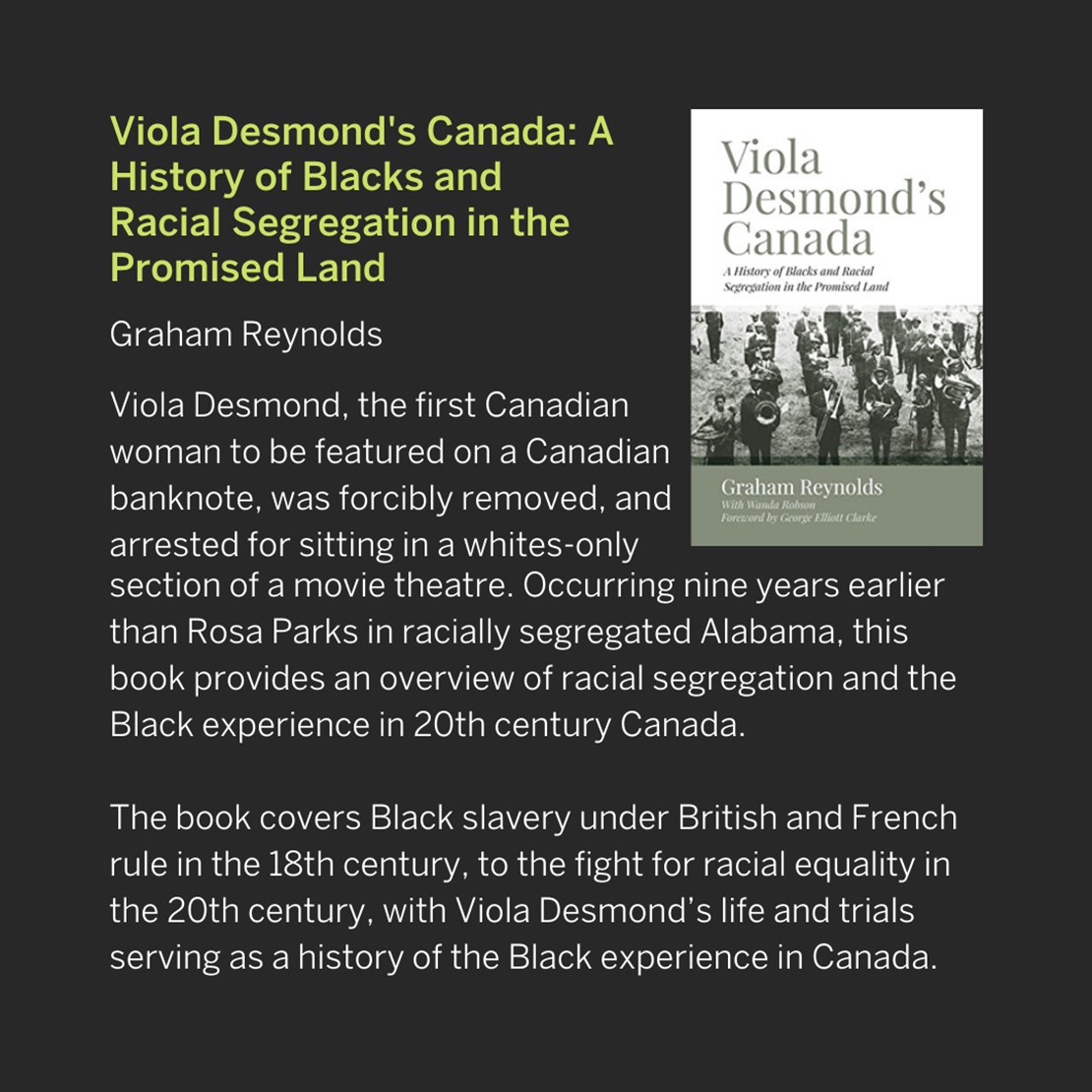 Viola Desmond's Canada: A History of Blacks and Racial Segregation in the Promised Land

Viola Desmond, the first Canadian woman to be featured on a Canadian banknote, was forcibly removed, and arrested for sitting in a whites-only section of a movie theatre. Occurring nine years earlier than Rosa Parks in racially segregated Alabama, this book provides an overview of racial segregation and the Black experience in 20th century Canada.

The book covers Black slavery under British and French rule in the 18th century, to the fight for racial equality in the 20th century, with Viola Desmond’s life and trials serving as a history of the Black experience in Canada. 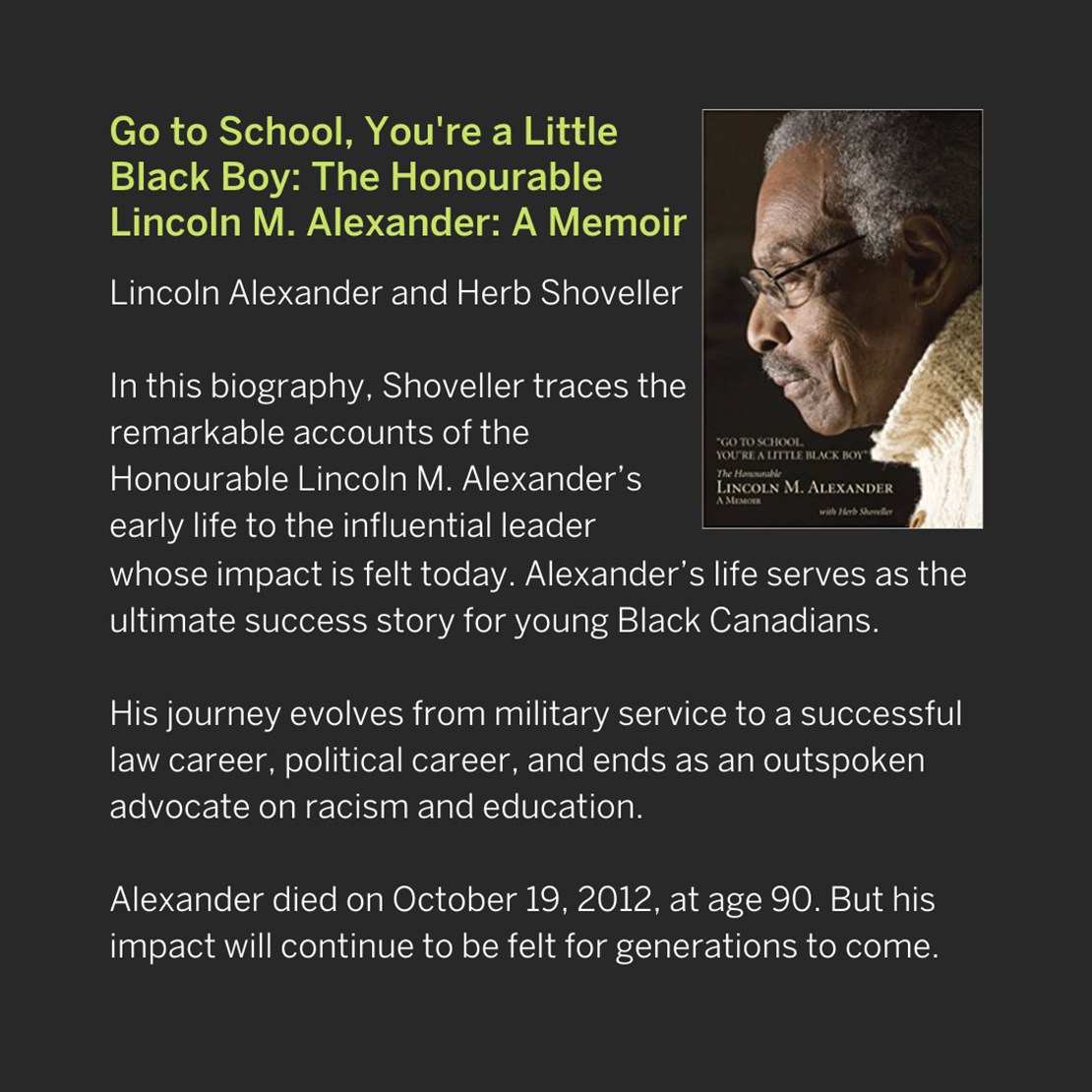 Go to School, You're a Little Black Boy: The Honourable Lincoln M. Alexander: A Memoir

In this biography, Shoveller traces the remarkable accounts of the Honourable Lincoln M. Alexander’s early life to the influential leader whose impact is felt today. Alexander’s life serves as the ultimate success story for young Black Canadians.

His journey evolves from military service to a successful law career, political career, and ends as an outspoken advocate on racism and education.

Alexander died on October 19, 2012, at age 90. But his impact will continue to be felt for generations to come. 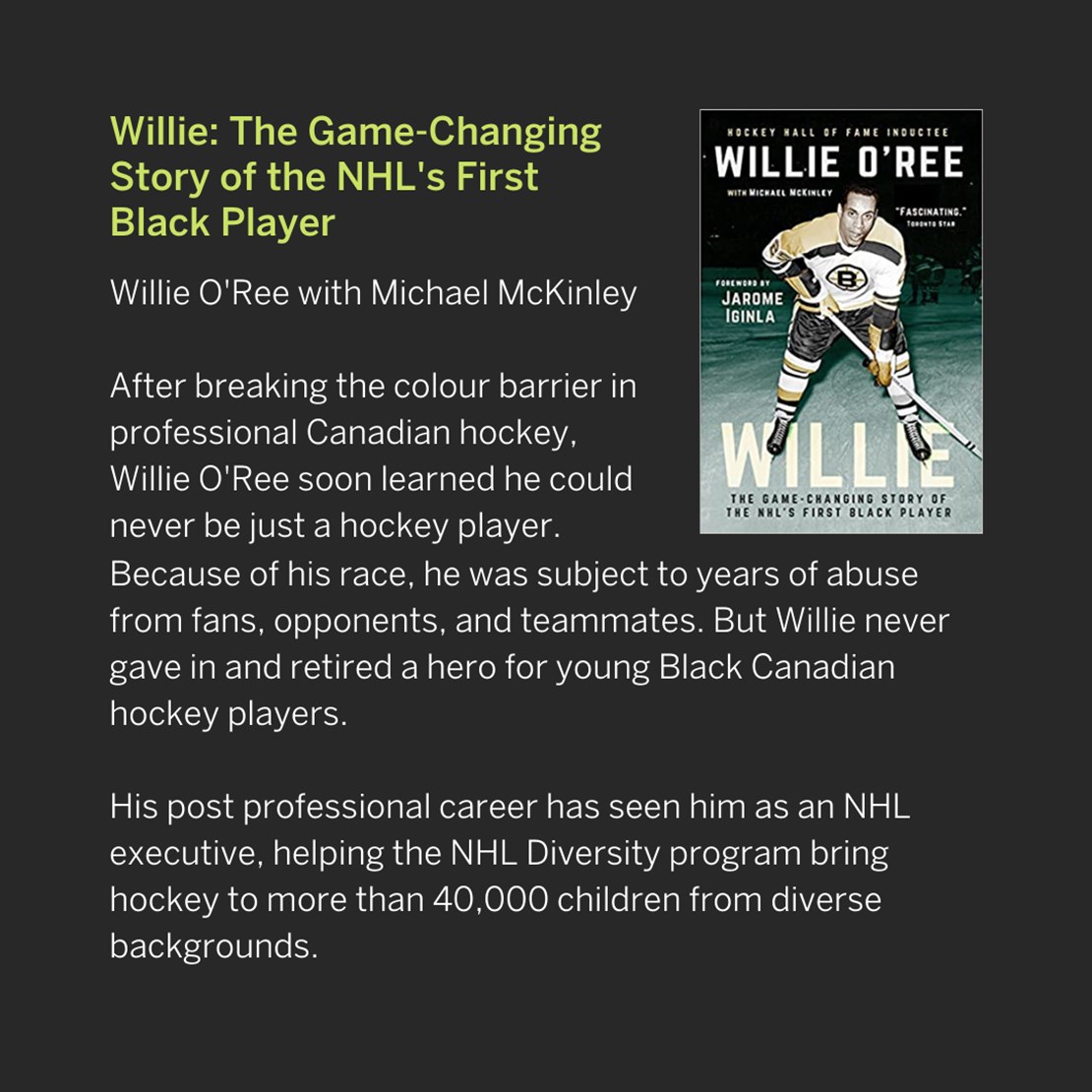 Willie: The Game-Changing Story of the NHL's First Black Player

After breaking the colour barrier in professional Canadian hockey, Willie O'Ree soon learned he could never be just a hockey player. Because of his race, he was subject to years of abuse from fans, opponents, and teammates. But Willie never gave in and retired a hero for young Black Canadian hockey players.

His post professional career has seen him as an NHL executive, helping the NHL Diversity program bring hockey to more than 40,000 children from diverse backgrounds.

By Willie O'Ree with Michael McKinley 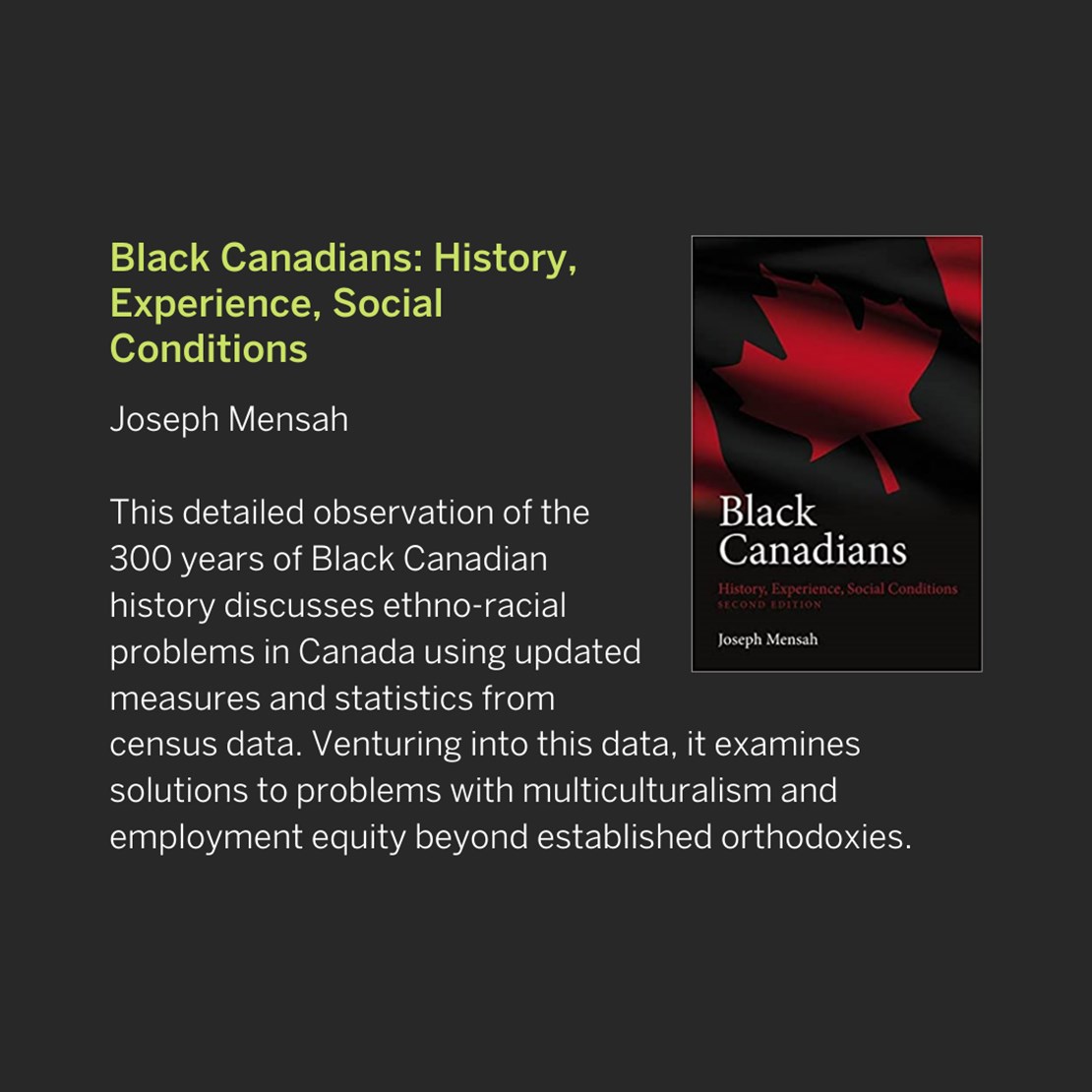 This detailed observation of the 300 years of Black Canadian history discusses ethno-racial problems in Canada using updated measures and statistics from census data. Venturing into this data, it examines solutions to problems with multiculturalism and employment equity beyond established orthodoxies. 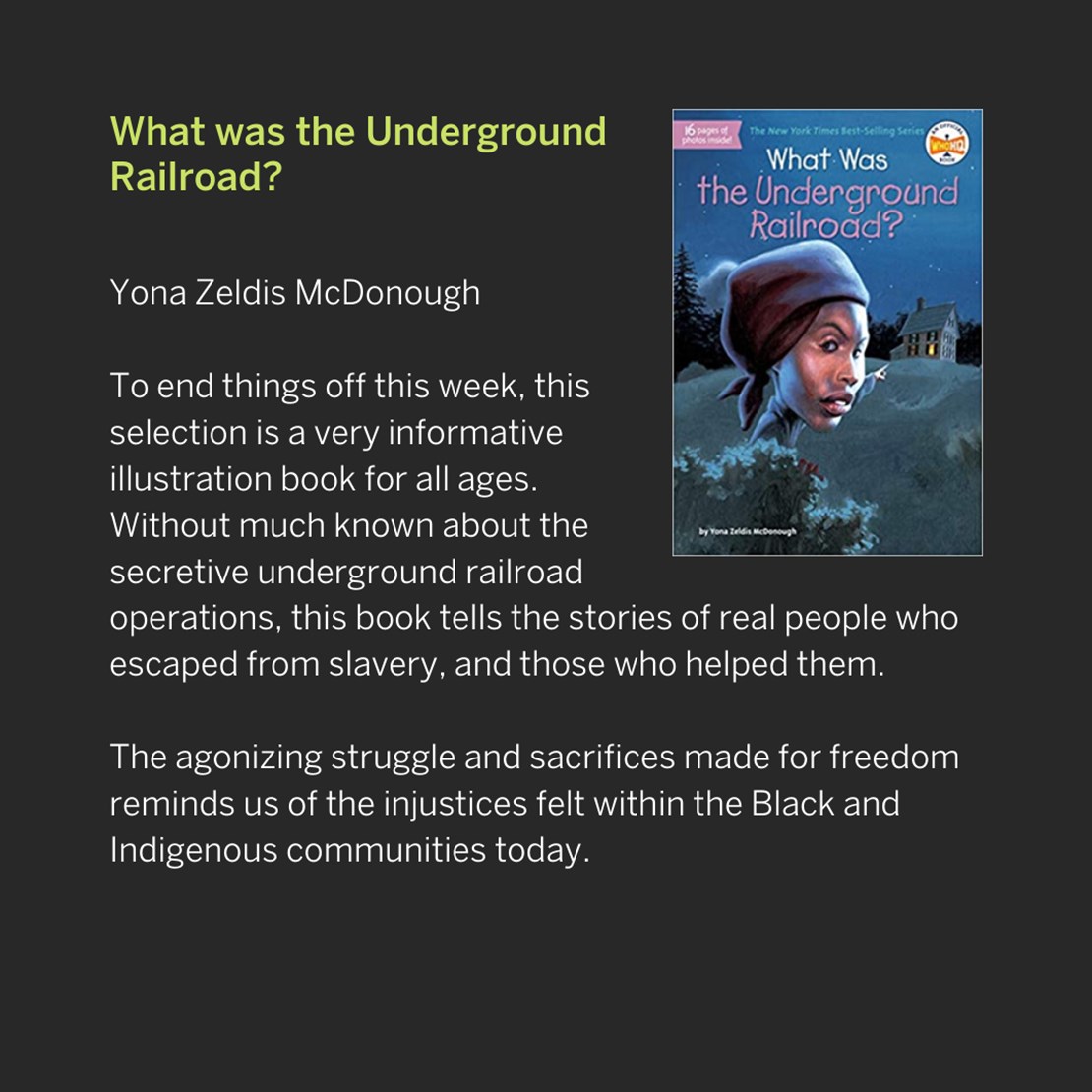 What was the Underground Railroad?

To end things off this week, this selection is a very informative illustration book for all ages. Without much known about the secretive underground railroad operations, this book tells the stories of real people who escaped from slavery, and those who helped them.

The agonizing struggle and sacrifices made for freedom reminds us of the injustices felt within the Black and Indigenous communities today. 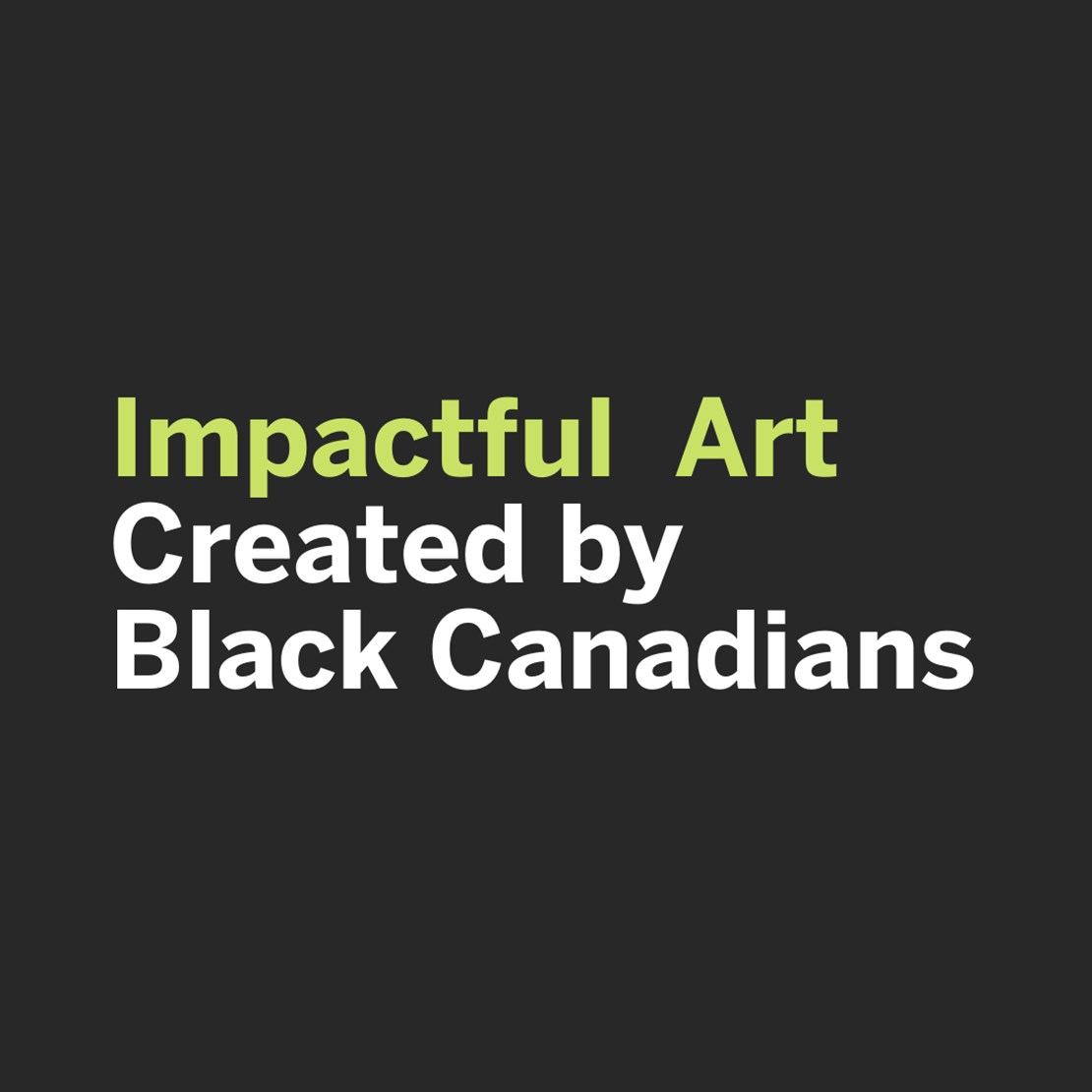 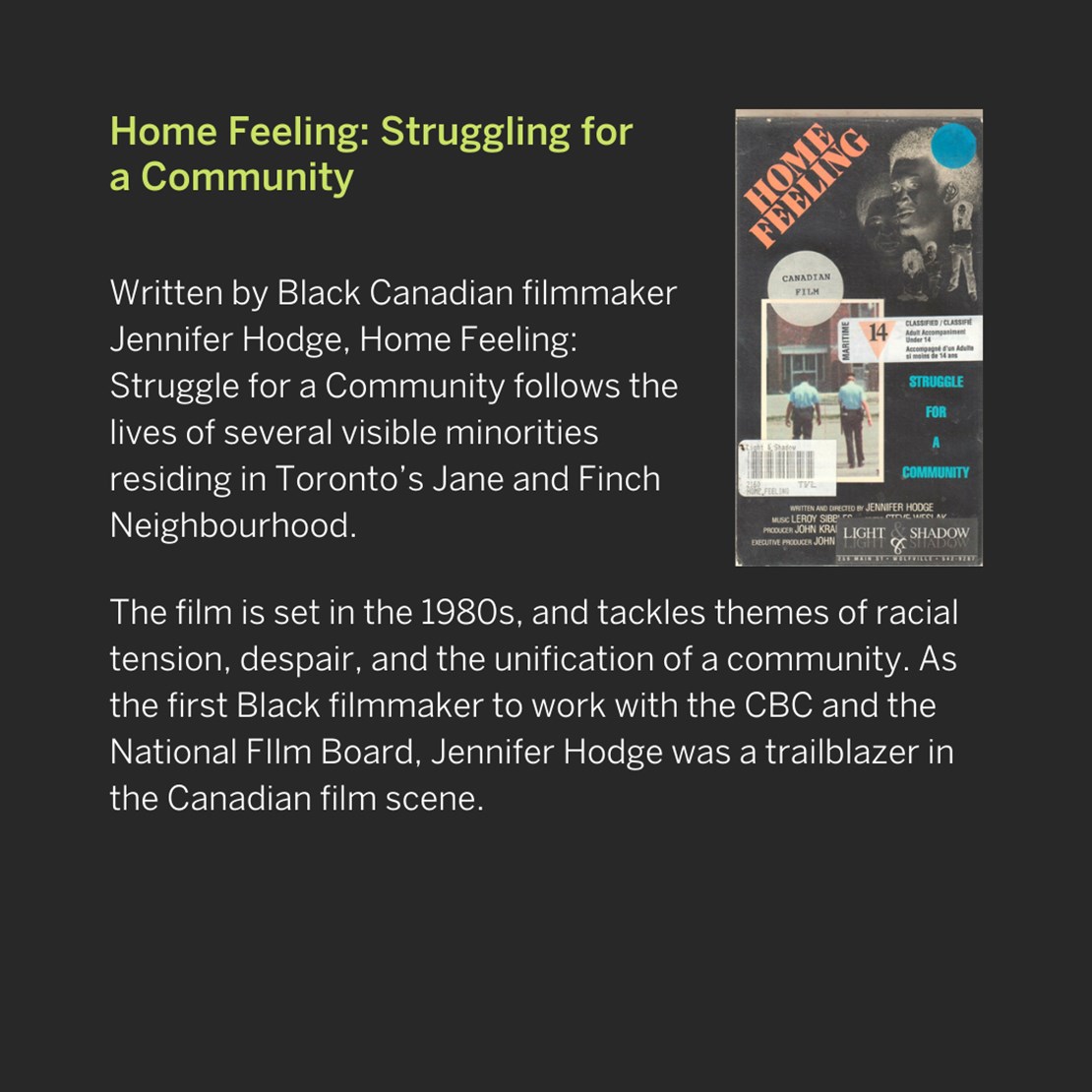 Home Feeling: Struggling for a Community

The film is set in the 1980s, and tackles themes of racial tension, despair, and the unification of a community. As the first Black filmmaker to work with the CBC and the National Film Board, Jennifer Hodge was a trailblazer in the Canadian film scene. 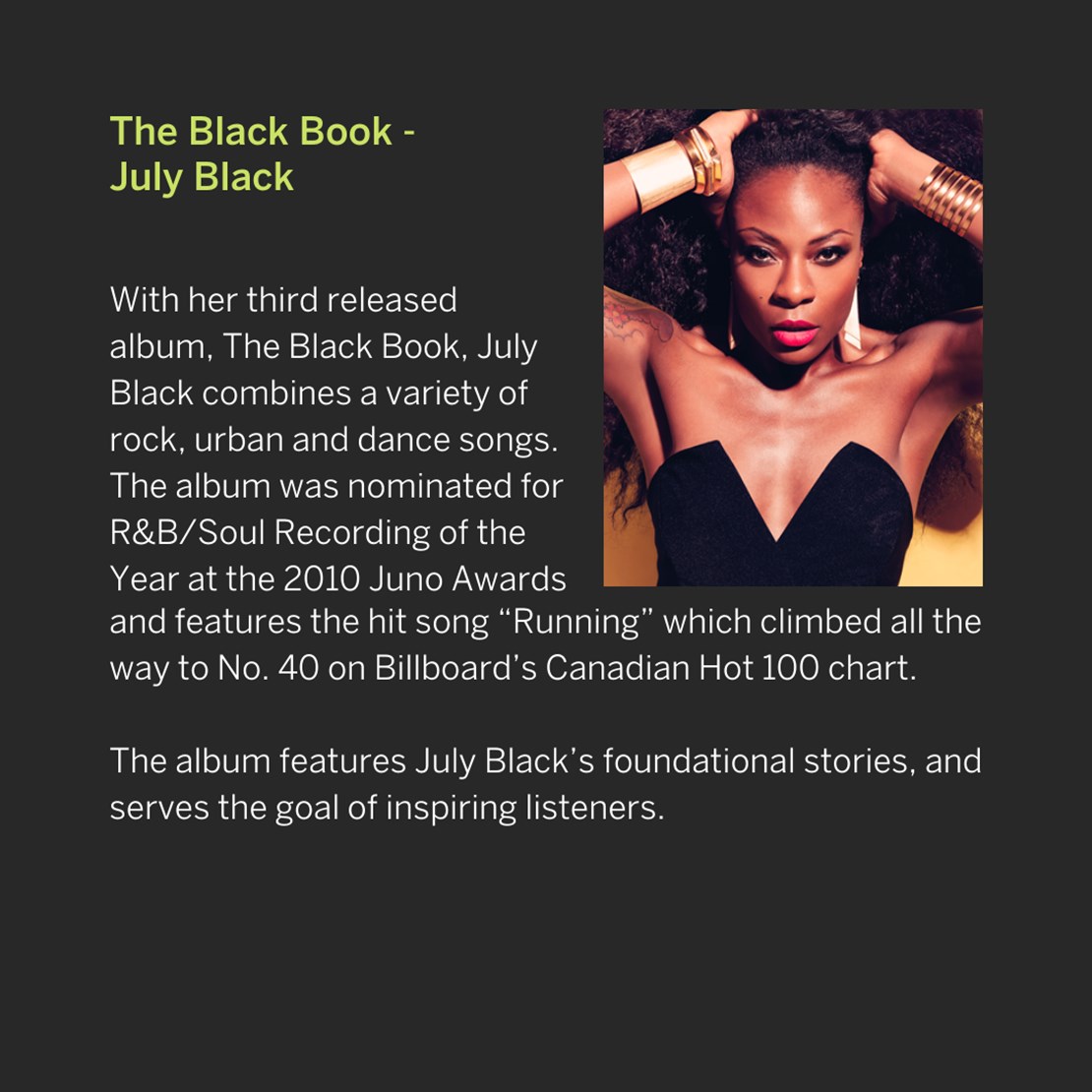 With her third released album, The Black Book, July Black combines a variety of rock, urban and dance songs. The album was nominated for R&B/Soul Recording of the Year at the 2010 Juno Awards and features the hit song “Running” which climbed all the way to No. 40 on Billboard’s Canadian Hot 100 chart. 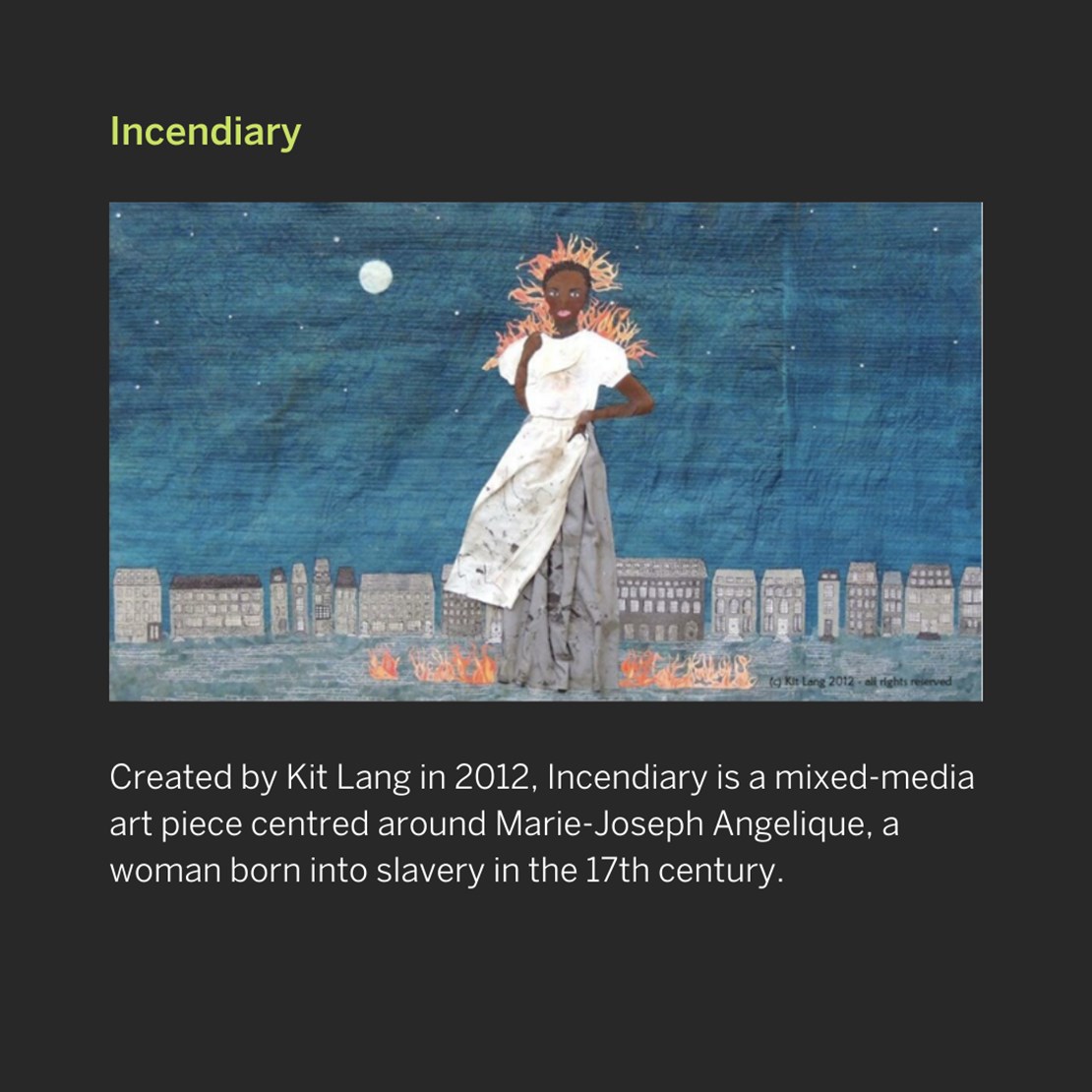 Created by Kit Lang in 2012, Incendiary is a mixed-media art piece centred around Marie-Joseph Angelique, a woman born into slavery in the 17th century. 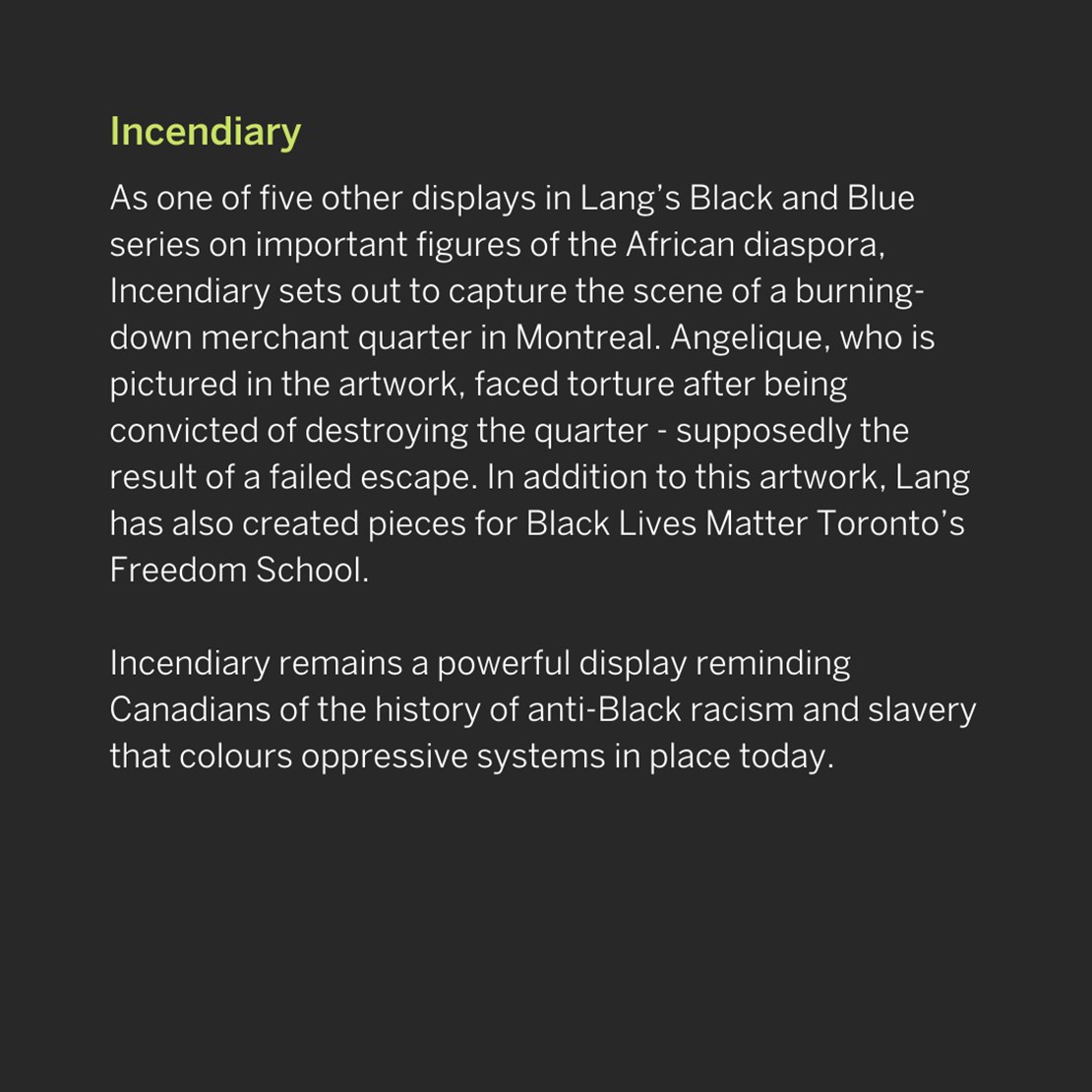 As one of five other displays in Lang’s Black and Blue series on important figures of the African diaspora, Incendiary sets out to capture the scene of a burning-down merchant quarter in Montreal. Angelique, who is pictured in the artwork, faced torture after being convicted of destroying the quarter - supposedly the result of a failed escape. In addition to this artwork, Lang has also created pieces for Black Lives Matter Toronto’s Freedom School.

Incendiary remains a powerful display reminding Canadians of the history of anti-Black racism and slavery that colours oppressive systems in place today. 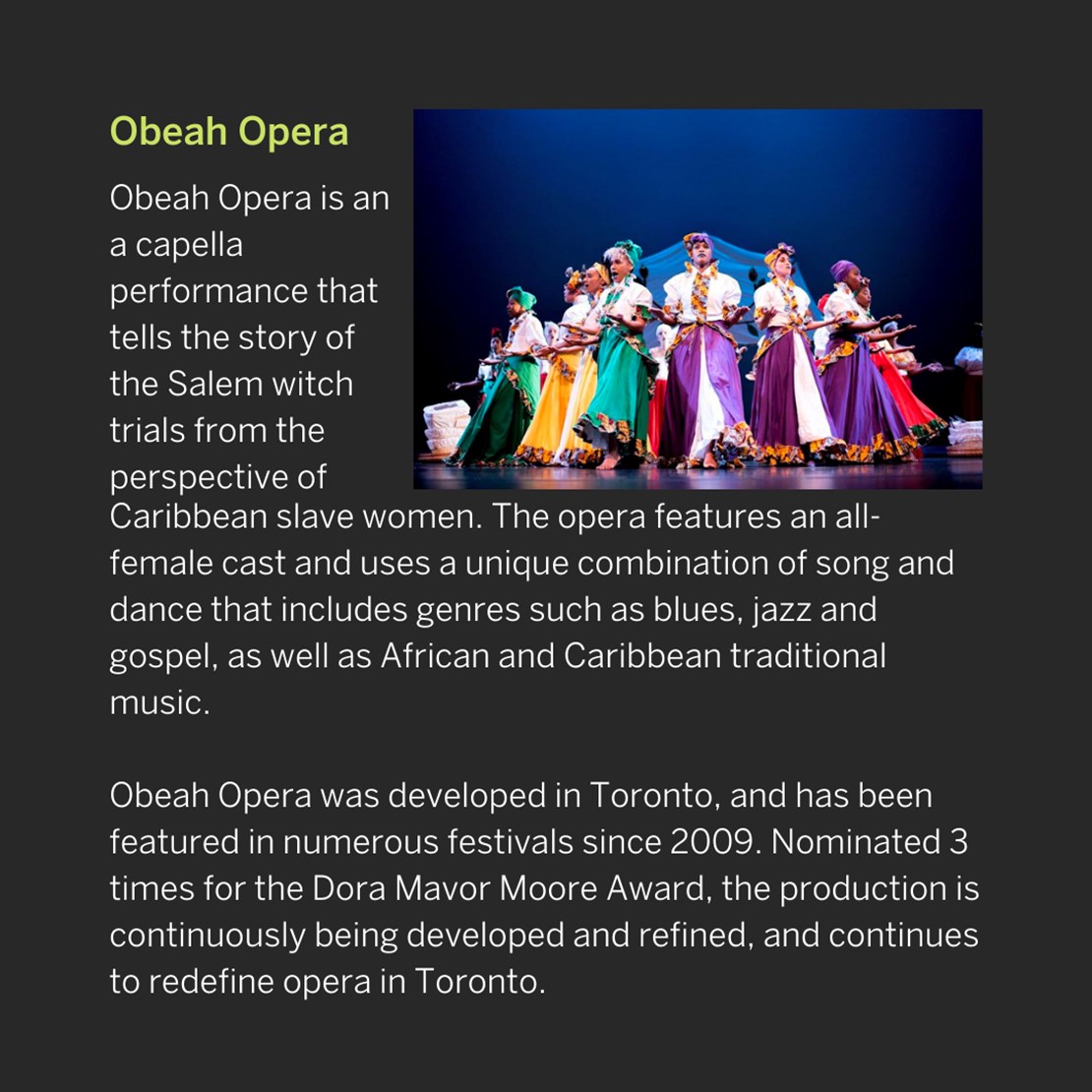 Obeah Opera is an a capella performance that tells the story of the Salem witch trials from the perspective of Caribbean slave women. The opera features an all-female cast and uses a unique combination of song and dance that includes genres such as blues, jazz and gospel, as well as African and Caribbean traditional music.

Obeah Opera was developed in Toronto, and has been featured in numerous festivals since 2009. Nominated 3 times for the Dora Mavor Moore Award, the production is continuously being developed and refined, and continues to redefine opera in Toronto. 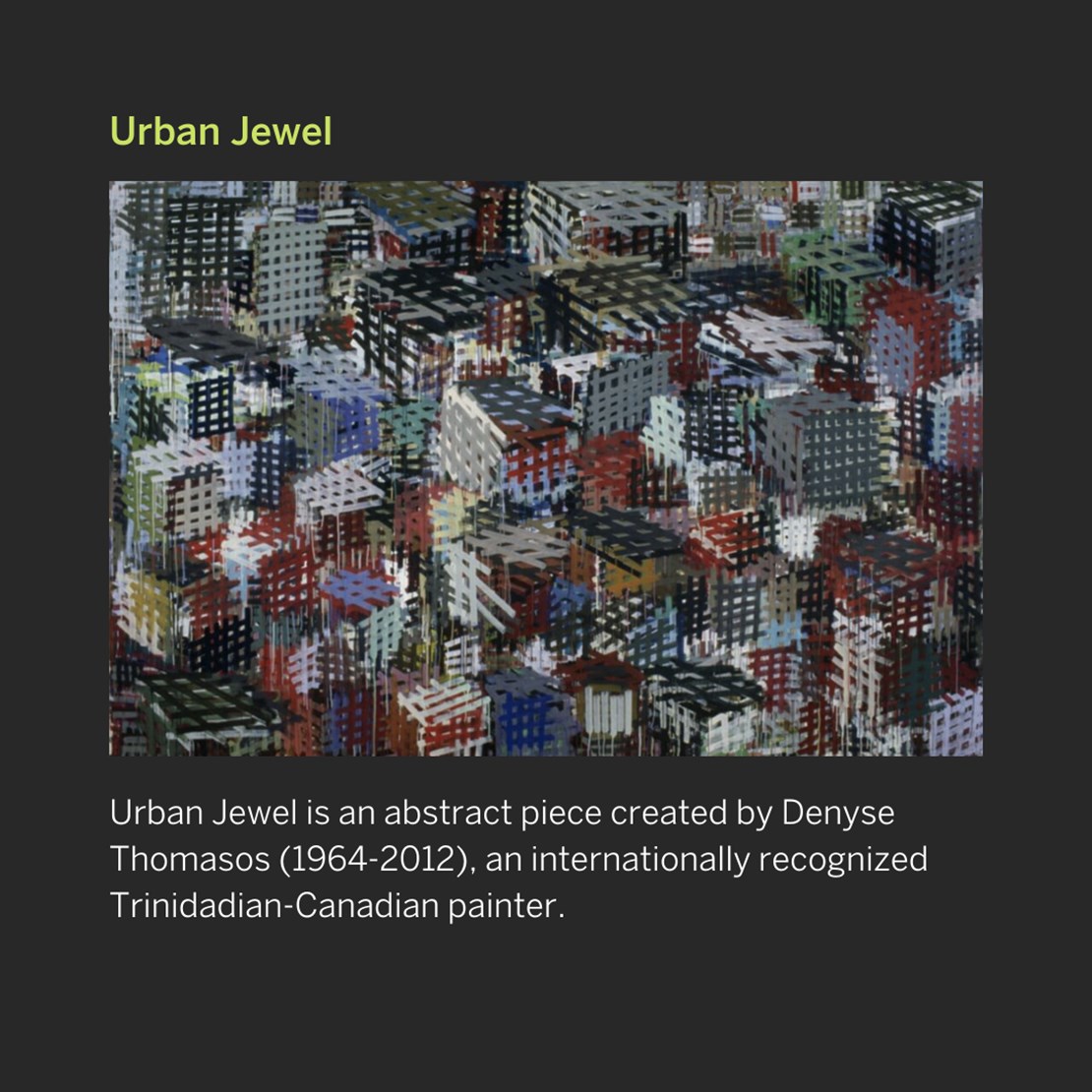 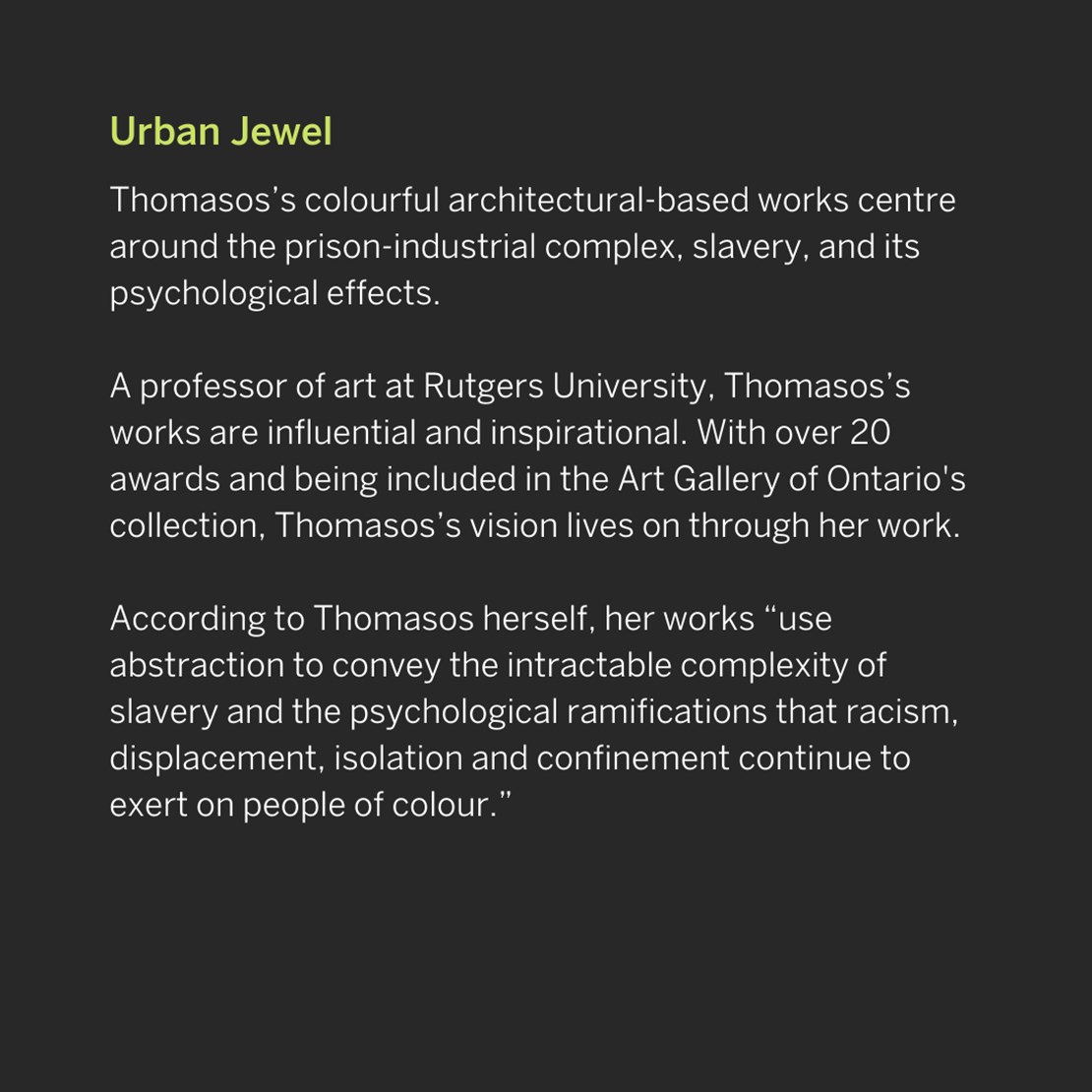 A professor of art at Rutgers University, Thomasos’s works are influential and inspirational. With over 20 awards and being included in the Art Gallery of Ontario's collection, Thomasos’s vision lives on through her work.

According to Thomasos herself, her works “use abstraction to convey the intractable complexity of slavery and the psychological ramifications that racism, displacement, isolation and confinement continue to exert on people of colour.” 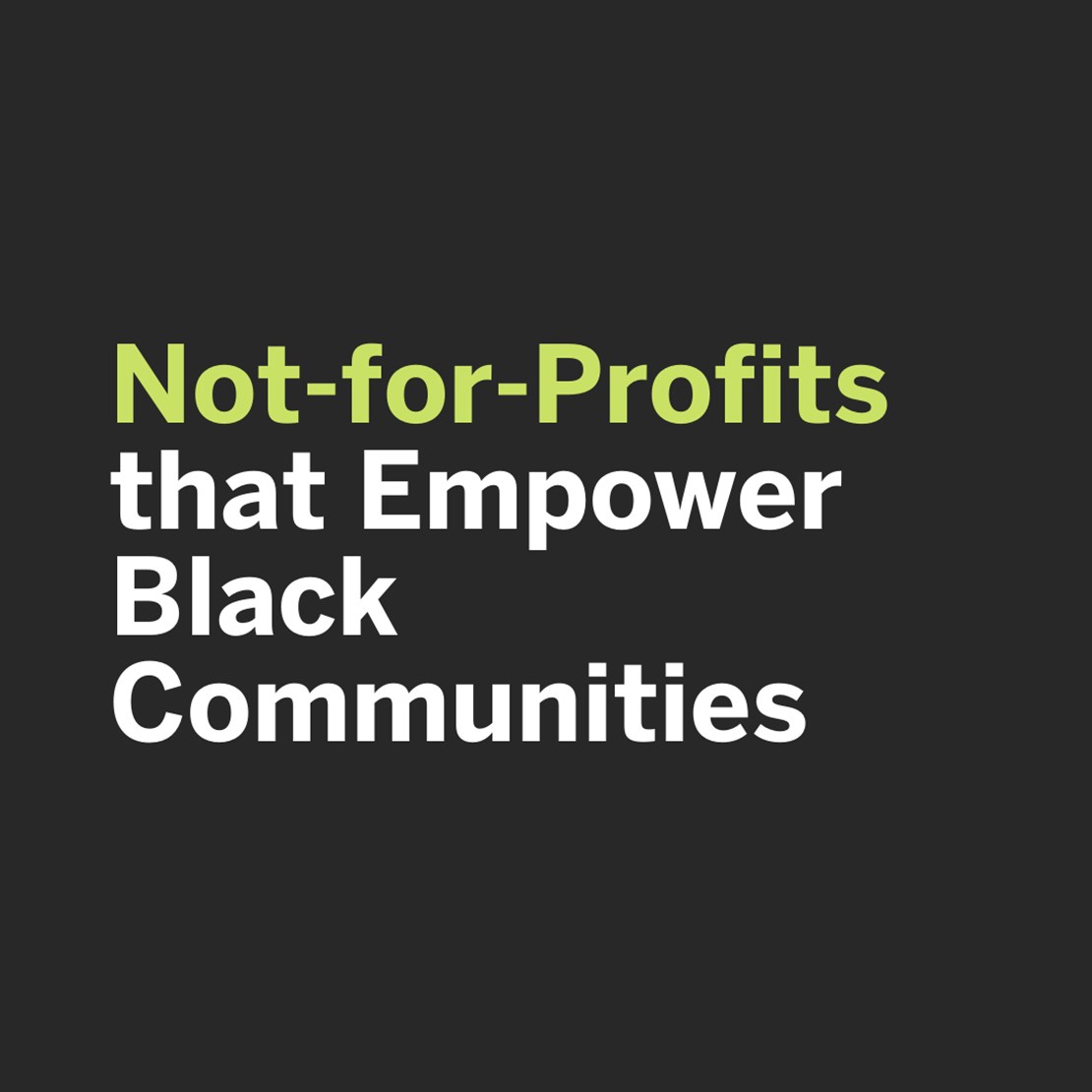 The fourth and final week's theme was not-for-profit organizations that empower Black communities. Swipe through to learn more. 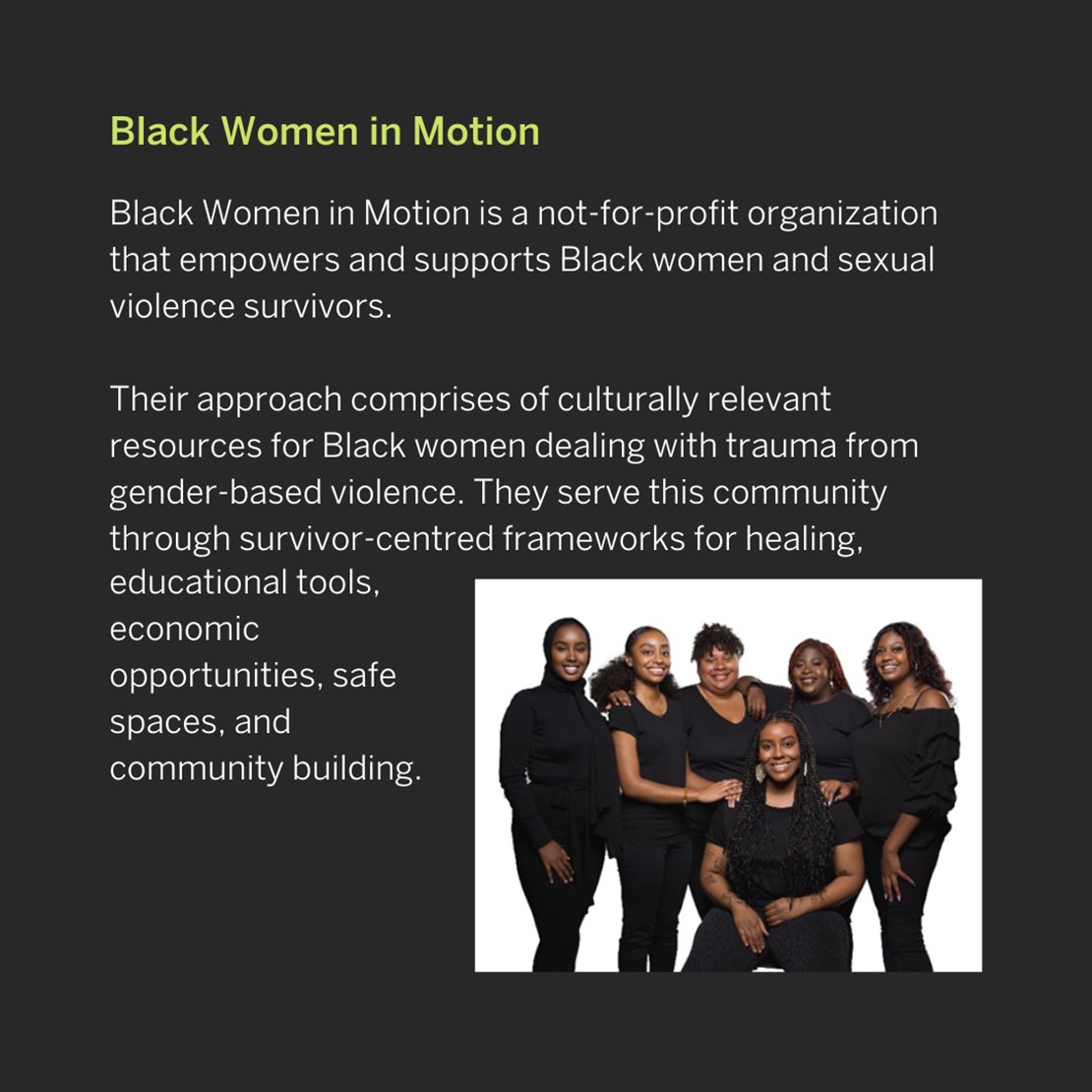 Black Women in Motion is a not-for-profit organization that empowers and supports Black women and sexual violence survivors. 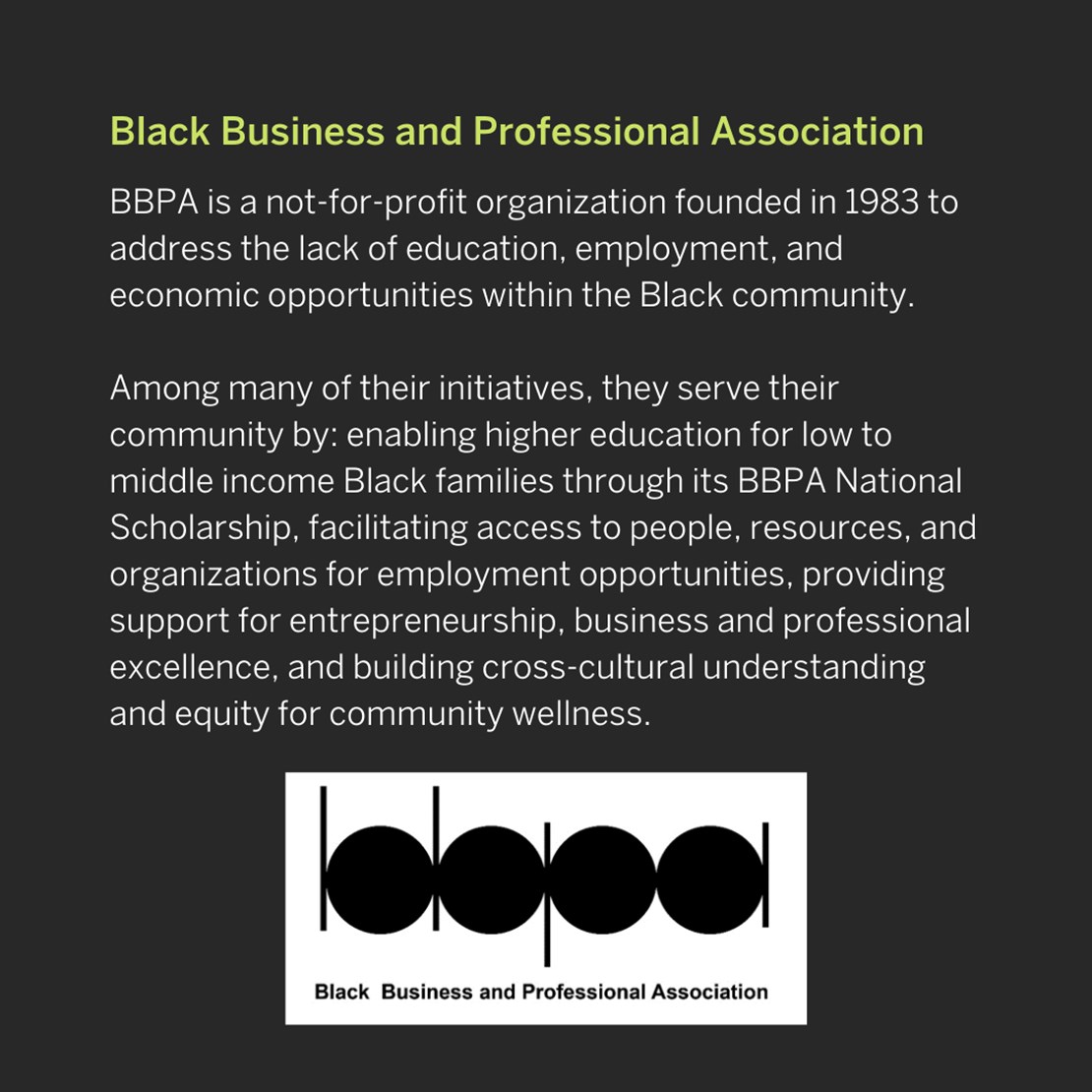 BBPA is a not-for-profit organization founded in 1983 to address the lack of education, employment, and economic opportunities within the Black community.

Among many of their initiatives, they serve their community by: enabling higher education for low to middle income Black families through its BBPA National Scholarship, facilitating access to people, resources, and organizations for employment opportunities, providing support for entrepreneurship, business and professional excellence, and building cross-cultural understanding and equity for community wellness. 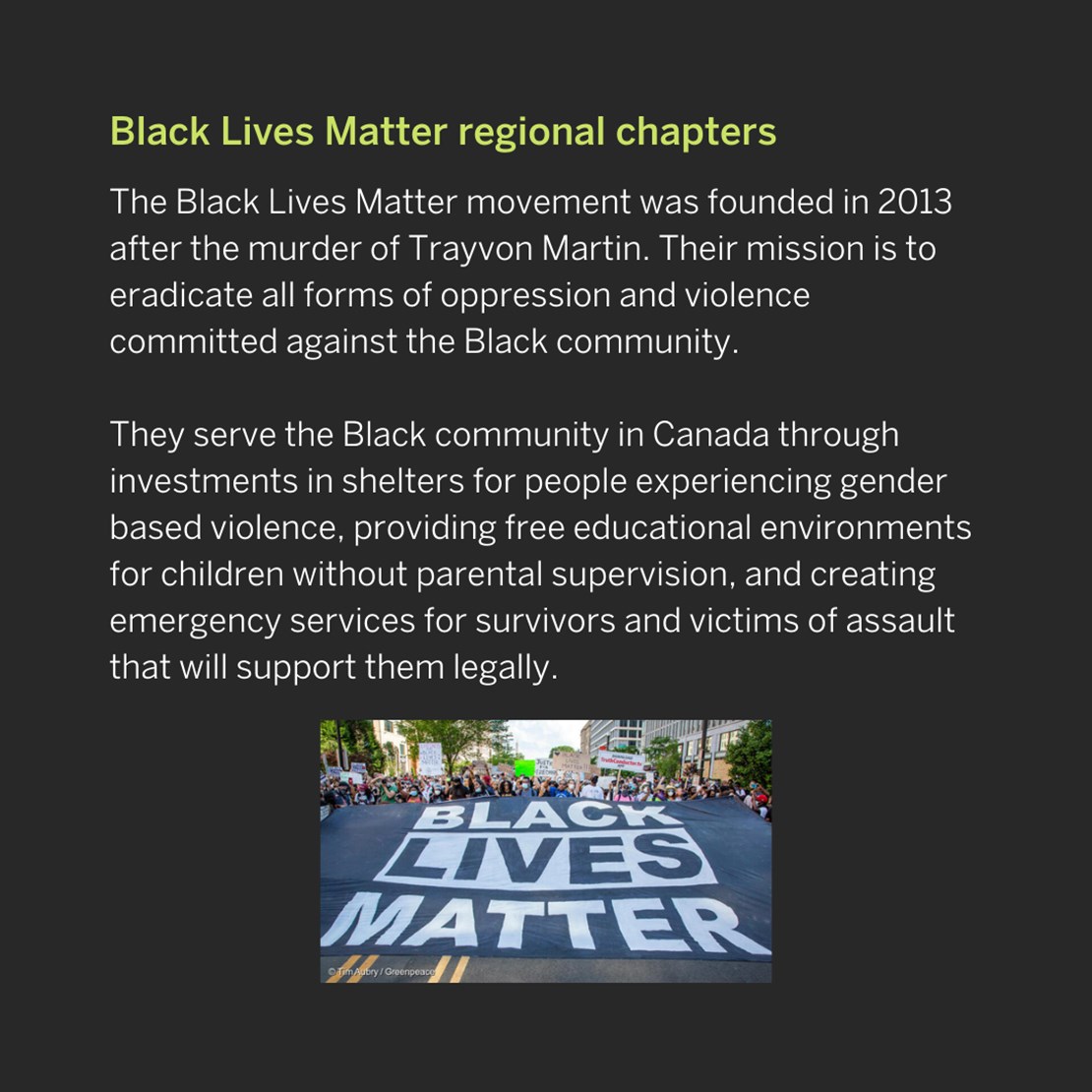 The Black Lives Matter movement was founded in 2013 after the murder of Trayvon Martin. Their mission is to eradicate all forms of oppression and violence committed against the Black community.

They serve the Black community in Canada through investments in shelters for people experiencing gender based violence, providing free educational environments for children without parental supervision, and creating emergency services for survivors and victims of assault that will support them legally. 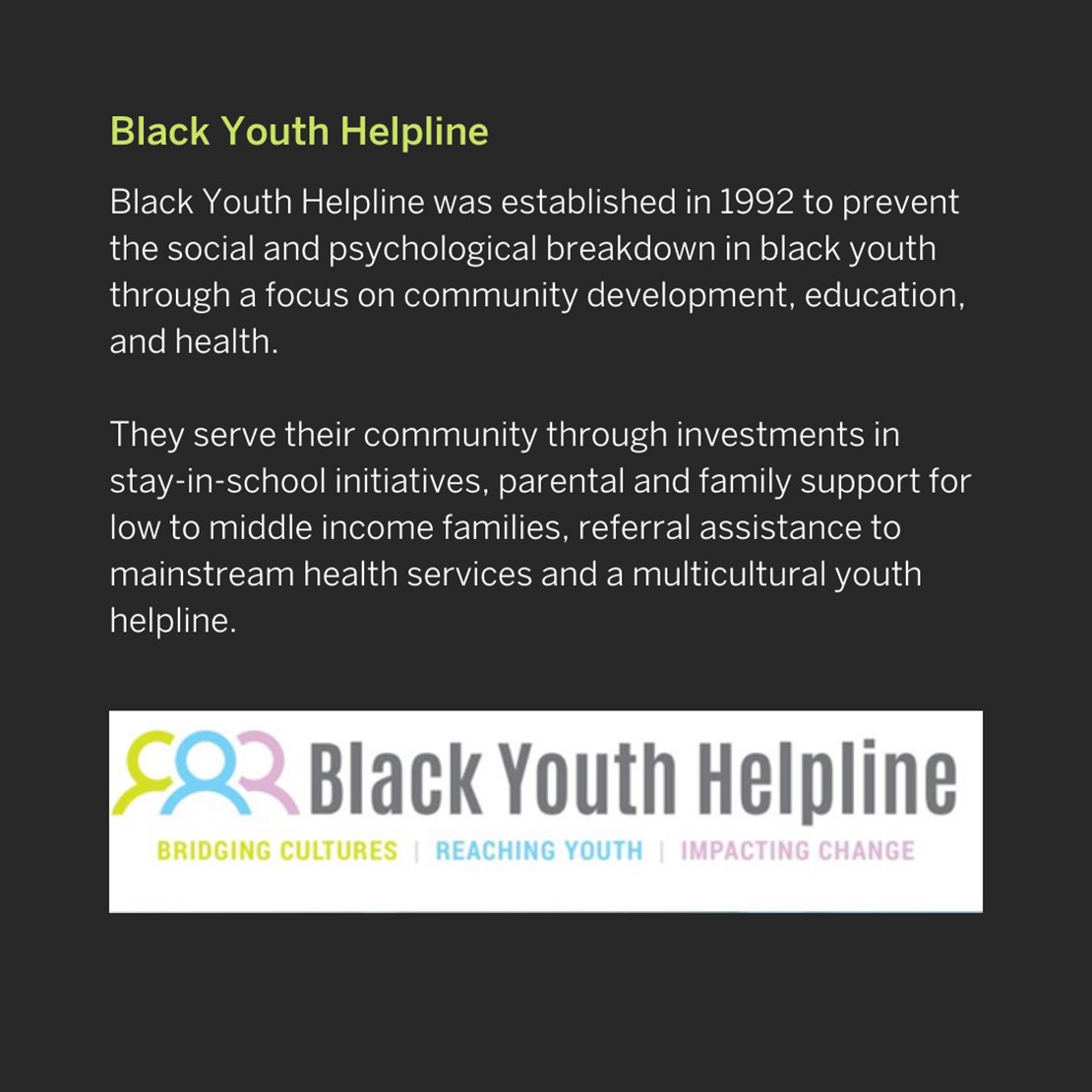 Black Youth Helpline was established in 1992 to prevent the social and psychological breakdown in black youth through a focus on community development, education, and health.

They serve their community through investments in stay-in-school initiatives, parental and family support for low to middle income families, referral assistance to mainstream health services and a multicultural youth helpline. 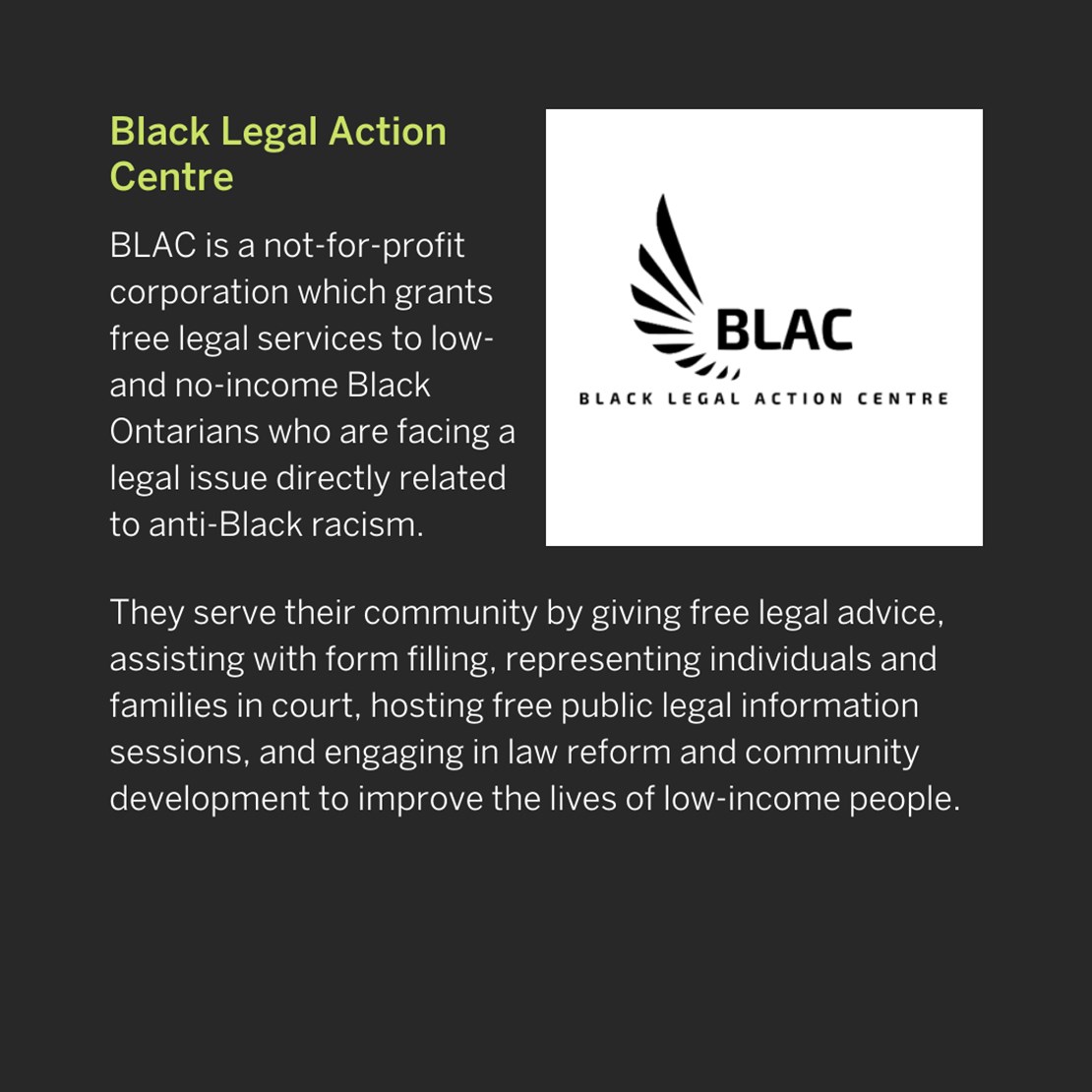 BLAC is a not-for-profit corporation which grants free legal services to low- and no-income Black Ontarians who are facing a legal issue directly related to anti-Black racism.

They serve their community by giving free legal advice, assisting with form filling, representing individuals and families in court, hosting free public legal information sessions, and engaging in law reform and community development to improve the lives of low-income people. 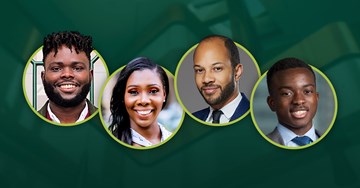 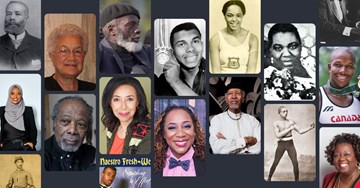 Celebrating Black History with the BSIC

Black Students at Ivey Collective supports students on their journey