When Penny Wise joined 3M Canada back in 2000, she noticed a wall bearing photographs of past presidents and hoped she’d one day be among those leaders. In February 2020, her wish came true when she was appointed president of 3M Canada. Wise is the first Canadian woman to head the company and the firm’s second woman president to date.

Wise spoke to students in Ivey’s MSc Global Leadership class for a case discussion on her role in starting N95 respirator production at the firm’s Brockville plant during the COVID-19 pandemic. But since her visit fell on International Women’s Day, she also discussed her journey as a woman leader and gave advice for empowering women in the workplace.

Lessons from the COVID-19 pandemic

Wise, who is also Co-Chair of the Canadian Chamber of Commerce’s Council for Women’s Advocacy, said a valuable learning from the pandemic is the need to support women coming back to the workforce, noting that more women than men were in roles that were adversely affected by the pandemic or left the workforce due to childcare or eldercare responsibilities. Among other things, the Council has been working with the federal government on a $10-a-day childcare plan.

“It is our job to make sure the right pieces are in place to help women come out of the pandemic successfully. Canada’s economy depends on it because 50 per cent of the workforce is women,” she said. “If we’re going to grow in the future, we need a fully functional, fully engaged workforce.”

The importance of role models and supporters

Wise told the students she was fortunate to have plenty of support during her career. She said her parents were prominent figures in motivating her towards her goals. As immigrants and university graduates, they underlined the importance of hard work, which Wise said motivated her to succeed.

She also credited her husband for providing unwavering support and partnership and noted that he was always invited to school functions acknowledging outstanding parent volunteers.

“That partnership is part of the importance of International Women’s Day and how you build a strong career,” she said.

Wise has also been fortunate to work at 3M, which she said is a progressive company with a strong track record of women in leadership.

“At 3M, I don’t think being a woman has ever impeded my ability,” she said. “But I have plenty of friends who have had different experiences – those who haven’t had the opportunity to take ideas forward because that’s not the company’s hierarchy or how the company works.”

But that’s not to say there weren’t obstacles. Wise shared how, at a young age, one of her teachers led her to believe girls aren’t good in math, but fortunately a subsequent teacher supported her and sparked an interest in math that led to her pursuing an undergraduate degree in mathematics.

Her advice for young women: Don’t let anyone tell you that you can’t do something.

“Break the biases for people and help people to move forward,” she said. “If you lift up other women and support and advocate then you will create an amazing career for yourself and others around you.” 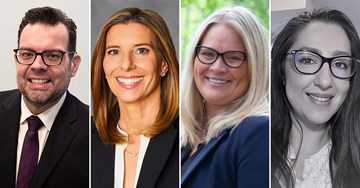 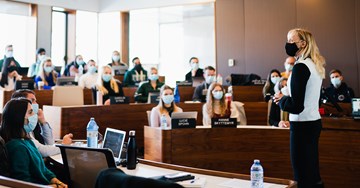