Professor Andrew Lo of the Massachusetts Institute of Technology (MIT) says he wants to be like Harvey Lodish and help save the life of a relative one day.

Lodish, a molecular and cell biologist at MIT, helped develop a drug to treat a rare genetic disorder known as Gaucher disease. Little did Lodish know at the time that later his grandson would be diagnosed with this disorder and Lodish’s pioneering work would save his grandson’s life.

Lo’s goal may seem lofty considering he is a financial economist, not a doctor or a scientist. Like many of us, he has watched helpless as family members and friends are diagnosed with cancer. But sitting in the waiting room of a doctor’s office one day, Lo decided to follow in Harvey Lodish’s footsteps and take the first step towards saving a life.

While reading an article in a medical journal, Lo discovered a conundrum: Funding of modern medicine is declining just when researchers are making tremendous progress in mapping human DNA and the genome. The problem is that the high cost of cancer research and the low probability of success is making it unattractive for the largest pharmaceutical companies to engage in primary research, preferring instead to purchase drugs at a later stage of development. So he came up with an idea that he hopes will reverse this trend: applying Wall Street-style financial engineering to the funding of cancer and other deadly diseases.

Lo outlined his idea at Ivey’s Tangerine Lecture in Finance in Toronto on November 3. The event, entitled Can financial engineering cure cancer?, discussed how portfolio diversification can be used to improve the odds of successful drug development and reduce the investment risk.

Looking at cancer from an economics perspective

In those waiting rooms, Lo read about all the recent medical breakthroughs that give patients hope. But he also learned early-stage funding for biotech startups is dwindling. The risk of drug failures is so high that it’s difficult to attract investors. And pharmaceutical companies are reducing their research and development budgets to instead focus on the marketing, distributing, licensing, and sales of existing drugs. That’s because drug development is costly, lengthy, and difficult. Lo learned it typically takes 10-15 years and more than $200 million to develop a single drug. His economics research suggested a solution to ease the financing burden.

“From the perspective of the patient, you don’t understand it. We’re making all these breakthroughs on one hand, yet funding is declining,” he said. “I can’t help but look at this from an economic perspective. My conjecture is it’s because of increasing risk and uncertainty. In finance, we tell our students there’s a tradeoff between risk and reward and, unless you have enough reward, you don’t want to take the risk.”

So he thought of a way to reduce the risk and increase the reward. Lo proposes that combining drug-development projects within a single portfolio, or megafund, will reduce the risk for investors. For instance, he said if we invest in 150 drug-development projects simultaneously and each one has the typical five-per-cent probability of success, there is a 98-per-cent chance that three drugs will be successful, thereby reducing the risk and increasing the reward for investors.

But, at a cost of $200 million per drug project, such a portfolio would require $30 billion in capital. So Lo again proposes an unconventional instrument to finance it: debt. Lo suggests cancer bonds can be issued to finance such megafunds. Other financial tools, such as securitization and credit-default swaps, can also help to manage the risk, he said. Lo points to proof that it works: several investment funds have adopted his idea and launched funds that put this idea into practise.

Taking cues from the financial crisis

“I got interested in these tools precisely because of the financial crisis. In my view, the financial crisis didn’t occur because these tools didn’t work. It occurred because these tools work too well. These are incredibly powerful tools that raise large amounts of capital over short periods of time for focused activities. That’s exactly what we want to do in dealing with cancer,” he said. “I’m not proposing that we apply these techniques without any concern about their consequences, but I think that in the case of cancer therapeutics and other areas of medical need, we can actually use these tools to create an advantage in ways they haven’t been used so far.”

Armed with this insight, Lo has been engaging various stakeholders and developing case studies that might enable investors to think more creatively about financing drug-development projects. He has posted a code on his website that can be used to run mathematical simulations of the payoffs, allowing researchers to modify the assumptions and forecast the expected returns.

One success story that he said he hopes will convince them is that of Harvey Lodish.

“We can all be Harvey Lodish if we invest in a fund that develops cures for our grandchildren’s diseases. That’s where I think we can come together,” he said. “We can do well by doing good. Finance does not have to be a zero-sum game if we don’t let it.”

The Tangerine Lecture in Finance series, sponsored by Tangerine Bank, aims to highlight thought-provoking and practical information about the world of finance. It is organized each year by the Tangerine Chair at Ivey, currently Associate Finance Professor Michael King. If you have a topic that you would like to see profiled, please email King at mking@ivey.ca. 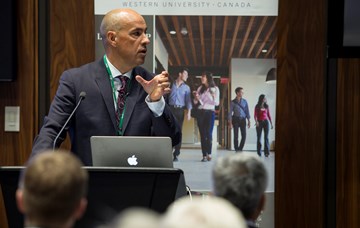 Boon or burden? The uncharted territory of ultra-low interest rates 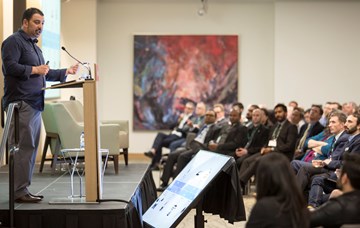 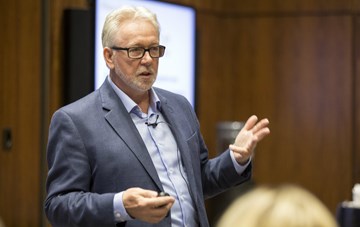