LONDON, ON – March 26, 2019 – New research by the Ian O. Ihnatowycz Institute for Leadership at the Ivey Business School has found perceptions of Justin Trudeau’s leader character have sharply declined in the wake of the SNC Lavalin affair.

The Institute commissioned two surveys, one in November 2018 of more than 525 Canadians and another similar sized survey conducted between March 15 and 20, 2019. In each survey, respondents used a 5-point scale (1=not at all, 3=somewhat, 5=to a great extent) to assess how the leaders of the major federal parties (Liberal, Conservative and NDP) measured up on the 11 dimensions that comprise the Institute’s research-based Leader Character Framework: accountability, collaboration, courage, drive, humanity, humility, integrity, judgement, justice, temperance and transcendence.

Dubbed the Political Character Index, the scores from all 11 dimensions are averaged to provide an overall character score for each leader. Prime Minister Justin Trudeau’s score significantly declined from 3.57 in November 2018 to 3.02 in March 2019. How dramatic is Trudeau’s decline?  His scores decreased on all 11 dimensions.

“Prior to the SNC Lavalin affair coming to light, Canadians held Prime Minister Trudeau’s character in much higher esteem,” said Gerard Seijts, Executive Director, Ivey’s Ian O. Ihnatowycz Institute for Leadership. “The significant advantage that Trudeau had on the character index has evaporated.  While his score declined substantially, the scores of Conservative leader Andrew Scheer and NDP leader Jagmeet Singh remained the same, neither seemingly setting themselves apart in response to the controversy thus far.”

According to Ivey’s foundational research after the 2008 financial crisis, good leadership rests on three pillars: character, competencies and commitment. Like in October 2016 and November 2018, survey respondents indicated that character is highly important as it relates to the role of Canada’s Prime Minister; in fact, nearly four out of 10 surveyed indicated that leader character is the most important consideration in the vote for political leaders.

According to the data, it appears that both Scheer and Singh continue to struggle to be adequately known to Canadians overall to form a robust impression of their leader character. For example, only 57 per cent of respondents in felt confident to rate Scheer, and only 47 per cent for Singh. On a positive note, both saw upticks in response rate compared to their results in November 2018, but still lagged far behind Trudeau.

“It was surprising to see just how many respondents were still unsure of how to rate Scheer and Singh on some aspects of their character. This suggests that, at this point, the general public knows very little about them even with a federal election less than seven months away,” said Seijts.

Surveys from November 2018 revealed that women and men perceived the leaders of Canada’s political parties differently. This difference was most distinct in Trudeau’s high character score among women, which was 3.72, versus 2.94 for Scheer and 3.18 for Singh. However, since the SNC Lavalin revelations, his scores have declined and women are no longer rating his character any differently than men. The scores for Scheer and Singh have not changed significantly, with neither one seemingly poised to be a clear alternative to Trudeau based on the Political Character Index.

Not surprisingly, character score responses for each party leader appear to be consistent with the respondent’s political affiliation. For example, Trudeau’s highest scores came from respondents who identified themselves as Liberals, even though those scores weakened within his own party between November 2018 and March 2019. While the scores for Scheer and Singh remain relatively stable, it is important to note that Trudeau suffered a steep decline in character rating with NDP supporters, who rated him very high in November 2018.

It appears voter intention for the Liberal party may be starting to shift to being in lockstep with the decline of Trudeau’s character scores. 40 per cent of respondents in November 2018 suggested they would vote or leaned Liberal; that figure declined to 31 percent in March 2019. Both the Conservative and the NDP numbers remained relatively similar with the sharpest increase of respondents selecting Other / None of the Above.

About the Ian O. Ihnatowycz Institute for Leadership

Ivey has been at the forefront of shaping the way leaders develop through both rigorous research and teaching. Today, our commitment to developing the type of leaders who will help their organizations to succeed has not changed. What has changed is the knowledge we have about the components of good leadership. The Ian O. Ihnatowycz Institute for Leadership (www.ivey.ca/leadership) has made research, teaching and outreach on the development of leader character our distinct differentiator in the vast leadership space. 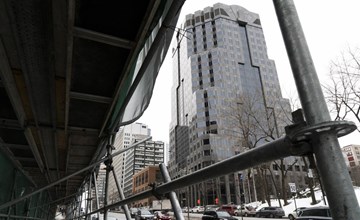