Whether adapting to COVID-19, creating inclusive organizations, or dealing with rapid technology changes, being a leader today is more complex than 30 years ago.

That’s why John Thompson’s advice to aspiring leaders is to broaden skills and diversify experience as much as possible. Thompson, LLD '94, the retired Executive Vice-Chair of IBM Corporation, was the inaugural recipient of the Ivey Business Leader Award in 1991 and is a graduate of Ivey’s Executive Management program.

“Your skills grow most when you are taking on something new and you work outside your comfort zone,” said Thompson. “In the end, great leaders are successful because they’ve developed great wisdom and great judgment and these are the characteristics that are built from the sum total of all of their experiences over their careers.”

Recognizing the outstanding characteristics and contributions of Canada’s exemplary business leaders over the sum of their careers has been an Ivey tradition for 30 years through the Ivey Business Leader Award. Created by the Ivey Alumni Network/Toronto, the Ivey Business Leader Award honours an individual or organization that has made a significant contribution to the advancement of business in Canada. Recipients have demonstrated leadership in their businesses, industries, and communities.

Thanks to the efforts of hundreds of volunteers, the Ivey Business Leader Award gala dinner has become the go-to event for networking and reconnecting. And it’s all for a good cause. Since its inception, the fundraising event has provided more than $5.5 million to help Ivey develop future business leaders. Proceeds have supported:

To mark the 30th anniversary of the Ivey Business Leader Award, we asked award recipients, volunteers, and scholarship recipients to reflect on what the award and being a leader means to them. Watch the video above and read some takeaways below.

The next Ivey Business Leader Award celebration will be held on October 27, 2022, honouring Dave McKay, MBA ’92, LLD ’19, President and CEO of RBC.

Although John Thompson is widely known for his notable leadership at organizations such as TD Bank Financial Group and IBM as well as his philanthropy, he says he has grown as a leader over time.

“Looking back, the advice I would have given myself is to have been a better listener in my early days as a junior executive,” he said. “Being a good listener is even more important in today’s environment because the challenges are not as well-defined as they used to be. They come at you more rapidly.”

Thompson said he eventually developed a more socialized style where he fostered teamwork and coaching and he encourages today’s leaders to embrace that approach.

The evolution of the Ivey Business Leader Award

Back in 1997, Barbara Wilkes, HBA ’74, MBA ’76, began volunteering on the organizing committee of the Business Leader Award as a way to re-establish her network. It was the beginning of a long-time commitment. Over the years, she has worked to grow the event into a major fundraiser and expand the award recipient criteria.

“We set a goal to expand it beyond the Ivey alumni community to recognize top Canadian business leaders. People who are not just financially successful, but who have also made major contributions to their communities and supported a range of activities,” she said.

Wilkes said it’s no surprise many of the recipients are Ivey alumni because the School is known for developing leaders. And the Business Leader Award is an important investment in Ivey’s future business leaders.

“It’s a cycle of great teaching, great students, strong alumni, and great reputation. And a great reputation for Ivey helps us to raise money for the School,” she said. “I see the Ivey community as part of that cycle.”

Zen (Harsh) Jain, an MBA ’21 candidate, said he believes people often don’t reach their full potential because they are unaware of what is possible. As the recipient of a Business Leader scholarship, he has seen what’s possible when people believe in you. Thanks to the scholarship, he was the first person from his homevillage in India to receive a university education.

Jain called for business leaders to put a greater emphasis on meaning and purpose going forward.

“To be a leader in 2021, requires us to be more socially responsible, resilient, and adaptable. We are clearly seeing an emphasized focus on diversity and inclusion and how business models have been redefined during COVID-19,” he said. “I think business leaders today need to ensure they use business for good.”

A long history of recognizing leadership

Here’s a list of the Business Leader Award honourees over the years: 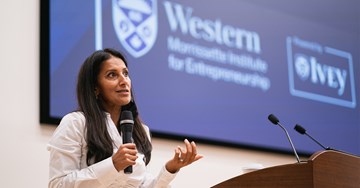 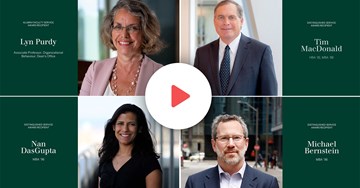 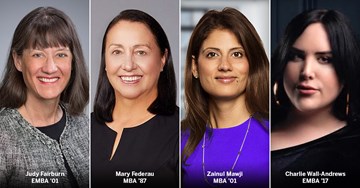