Holding leadership accountability within the Toronto Raptors is what John Wiggins calls his “Jerry Maguire moment.”

In the story of how he came to be Vice President, Organizational Culture and Inclusion for the Toronto Raptors at Maple Leaf Sports and Entertainment (MLSE), Wiggins recalls a scene in the 1996 film Jerry Maguire where the main character risks his career to improve the world of sports business.

During a Raptors’ organization town hall following George Floyd’s murder in spring 2020, Wiggins unmuted himself to make a bid that could have ended his career (at the time, he was VP, Raptors 905, their NBA G league team). But Wiggins was prepared, and followed up with an email to Masai Ujiri, the Raptors’ president, detailing how the organization could use its influence in the fight against racism and how he wanted to be involved. And like Jerry Maguire, the risk paid off. Wiggins was hired in July 2020 to a newly created role with the Toronto Raptors, leading a cross-sectional group to address social injustice, inclusion, equity, and political reform.

Throughout his keynote address for this year’s HBA Leadership Day, Wiggins encouraged HBA1 students to understand that showing up for challenging conversations and listening to diverse perspectives was an important part of becoming an inclusive leader. Here are some key takeaways.

Be visible on your platform for change

From entering the NBA bubble in a team bus branded with Black Lives Matter to celebrating women in sport with an all-female broadcast, Wiggins is ensuring the Raptors take a leadership position to move conversations on diversity and equity forward. Similarly, he has dedicated significant time and effort towards supporting youth in the Caribbean with academics and athletics through his charitable organization, Focused Dreams Forward Foundation. Wiggins was unequivocal that leaders can and should use their position to do powerful things that make the world a better place.

Educate yourself about history

Wiggins also advised that we move beyond the history we were taught in school and cited examples of how systemic issues of injustice persist in Canada in regards to anti-Black and anti-Indigenous racism, and violence against women.

While shining a light on a dark past (and present) can be difficult, Wiggins sees an opportunity to continue investing in tangible change that improves people’s lives.

“I think about all the other people that have invested their time in social justice or civil rights activism … they endured much more than I have. I have an opportunity to carry forward their flame and the torch,” he said.

And moving forward starts with having courageous conversations.

“There are some courageous conversations that we need to have – we also call it fearless dialogue. We need to speak on [issues of racism and other forms of injustice] and the message might not always be a soft one or a polite one. Sometimes it has to be a direct message,” he said. “As a leader, you need to start the conversation … You can start the conversation and then just listen … Sometimes just listening, which goes back to educating yourself, helps a lot.”

Make it safe to make it bold

Leaders need people around them who can round out their knowledge base and help them grow. Wiggins said it is important to seek diverse perspectives and then include those perspectives.

“I was once told diversity is getting as many people as you can to the dance and inclusion is asking people to dance … You have to ask people for their opinions. You have to ask them for their perspectives. And as a leader, I have to find a way to implement it. It's not always about me,” he said. “The other part about leadership is to have smarter people in the room … That is the inclusion part – bringing everyone together at their best to provide the strongest contribution and then we are all informed together.”

The world shows you the truth

And when asked about his thoughts on those individuals who don’t believe racism or sexism are an issue in Canada, Wiggins said he believes more people than ever before have had to face the reality of the social injustice in our society.

“The world presents the truth. You can't ignore what's happening if you're actually paying attention. If anything positive came out of COVID-19, it was that we were all sitting at home with fewer distractions and with less opportunity to deflect,” he said. “We saw how bad the world was with respect to racism and hate … I just don't think we're in a place anymore where someone can say it doesn't happen or it doesn't exist because the world reminds us every single day.”

Watch the interview with John Wiggins above. 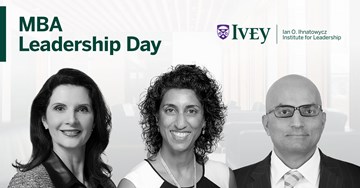 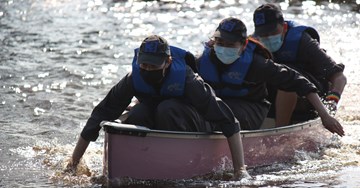 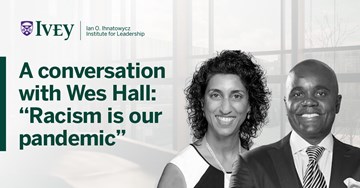 What did the pandemic teach us about leadership’s ability to end racism?