The need for leaders with strength of character has never been more urgent, especially as the world seeks to address the convergence of some of the worst crises the world has faced.

That’s why Ivey’s MBA students engaged in a day dedicated to their development as leaders, complete with cases on leadership challenges they might face in their careers and advice from respected practitioners who have been there.

Hosted by the Ian O. Ihnatowycz Institute for Leadership, the 2022 MBA Leadership Day challenged students to courageously strive to make a difference like the inspirational role models who were guest speakers at the event.

The students heard from Erika Cheung, one of the whistleblowers who exposed that the Silicon Valley blood-testing startup, Theranos, was tampering with statistics in its laboratories. In a candid conversation with Jon Hantho, MBA '89, President and CEO of CBI Health Group, Cheung spoke about the sense of integrity that led her to stand up for what she believed in and why ethics should be prioritized in business leadership. 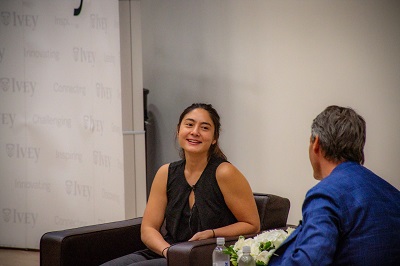 A highlight of the day was the chance to hear from a panel of practitioners about the experiences and influences that shaped them as leaders, and what kind of leadership is needed in this era of converging crises. The panel included Pat Horgan, HBA ’82, Board Chair at Southlake Regional Health Centre; Laurence Mussio, Chair of The Long Run Institute; and Jeannine Pereira, HBA '95, Director of Talent Development at EY Canada. The discussion was moderated by Kimberley Young Milani, Associate Director of the Ihnatowycz Institute.

Here are some takeaways.

Leadership isn’t a rank or position, but a disposition that enables people to stand up for what they believe in, as Cheung demonstrated. And in uncertain times, like the current environment, Pereira says there is an opportunity for courageous leaders to pave a way forward. She cited how Ukrainian President Volodymyr Zelenskyy has inspired the world by standing bravely on the frontlines while his country is under attack.

Sharing that each day she puts together her purpose with the word “courage” included, Pereira encouraged the students to consider how they can stand up and contribute to society.

“I think each one of us can take a stand and I empower you to think about the courageous leadership you can show in this environment,” she said.

Horgan told how he saw the power of purpose first-hand when he was tasked with leading a new strategy in one of his former roles. Since he had no direct reports, Horgan said he worried he wouldn’t get buy-in, but learned that allowing others to contribute when creating objectives was key to gaining their support.

“It’s not about whether you’re going to be giving them an evaluation. It’s about whether the purpose is the correct purpose – that you’re doing the right thing,” he said.

While it is often remarked that history repeats itself, Mussio, a historian, clarified that things don’t happen exactly the same as the previous instance, but there may be similarities. As a result, it’s important for leaders to look back at the collective experiences of corporations and society over time for insights on how to navigate through similar crises.

“There is a world historical change happening in these particular times that demands that leadership look a little bit deeper,” he said. “There’s a recognition among senior corporate executives and urban policymakers that those connections [between past and present] need to happen or we won’t have the decision-making that we would like to have to build that future we’re all hoping to enjoy.”

It can be humbling to reflect on your mistakes, but humility is foundational to your development as a leader. Whether it was 360-degree feedback revelations or regrets about an action or inaction, the panellists shared how they learned from failure and why it’s key to innovation.

Horgan said he stays humble by keeping in mind that the next generation of leaders will bring new ideas, perspectives, and approaches.

“Always keep in mind that the next group is coming. Competition is moving very quickly and you have to keep up,” he said. “You have to be thinking about different ways of doing things.”

Recognizing that you can benefit from others’ expertise is another form of humility – one that Horgan says he experienced working with health-care professionals during the pandemic.

“You see how tough that job is and you know you can’t do what they’re doing, so you just clear the path to help them do it,” he said. “I look at it as servant leadership. You’re the leader and people want to work with you because they know you have their back, you’ll help them to develop, and you’re looking for their success … If you can accomplish that, you’ll go a long way.”

On the other hand, having too much humility can cause even the most accomplished leaders to doubt their capabilities, but there are ways to overcome this. Pereira said she has created a personal board of directors – a group of people she can turn to for advice and encouragement. She also keeps any letters or texts where people complimented or thanked her and revisits them to reminder herself of her accomplishments.

“When you feel that you are doubting yourself, get out those letters and texts and bring yourself back up. Give yourself another chance,” she said. “Remind yourself that somebody else believed in you so you should believe in yourself.”

More advice for the next generation of leaders

“The world will not sit still and you want to lead that change. Keep your eyes open and try to absorb where everything is going so that you’re not irrelevant. Think about how you can move to the next level and find people you can trust and engage with who can help you with that.”
– Pat Horgan

Put out into the deep

“When I look back and ask, Where did I really excel?, it was when I took a chance or went deeper. That was always rewarding, not necessarily monetarily, but in terms of experience or intellectual satisfaction. The rewards don’t always have to be monetary.”
– Laurence Mussio

Focus on the process, not the endgame 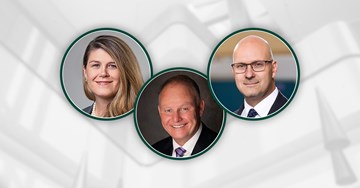 Leadership lessons from the crisis in Ukraine 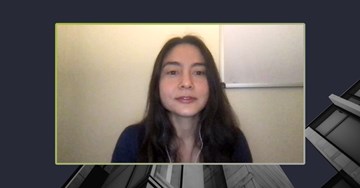 Stay true to your values: Character and Candour Conference 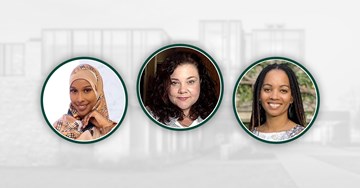