While Business Council of Canada President Goldy Hyder defines leadership as encompassing many aspects of building – building trust, connections, or culture; building up people or teams; and building movements or coalitions; in a recent lecture he was much more literal. He issued a call to action to Canada’s current and future leaders to create an industrial strategy focused on large-scale building projects that showcase the country’s potential to the world.

Hyder delivered this message at two separate events for the Thomas d’Aquino Lecture on Leadership, an annual event supported by the Ian O. Ihnatowycz Institute for Leadership that brings in distinguished leaders for thoughtful discussions on leadership within Canada’s public and private institutions. Hyder spoke at an event for leaders from the public, private, and not-for-profit sectors on November 7 at the National Arts Centre in Ottawa, and previously gave a  lecture for HBA1 students at Ivey on October 3.

Putting Canada on the world stage

Citing large infrastructure projects in Canada’s history, such as the Trans-Canada Highway, The Great Lakes St. Lawrence Seaway System, and the TransCanada pipeline, Hyder said these projects enabled the Canadian economy to prosper in the aftermath of the Second World War. He also told how such projects fuelled both domestic and international demand for Canada’s natural resources and unleashed a positive can-do spirit.

“It unleashed a belief in Canada’s ability to overcome huge obstacles and impediments,” he said. “We showed the world that little old Canada can lead the world.”

Hyder urged leaders to prioritize export-enabling infrastructure projects; such as bridges, pipelines, rail terminals, electricity grids, and wind and solar power systems; that will help to pay for critical social infrastructure, fund the transition to green energy, and create a resilient economy for future generations.

“Canadians used to be great at building things. The country we know today – the modern advanced economy that provides Canadians with a high quality of life and frankly is a magnet for people around the world … would not exist had it not been for leaders who thought big and built even bigger,” he said. “These projects were deliberate acts of nation-building and they were acts of thinking for the longer term, not the short term. They were not by accident. They were by design.”

But Hyder also acknowledges that leaders today face an uphill battle when it comes to advancing industrial development due to shifting regulatory hurdles and political interference that delay projects and increases their cost. He detailed how delays to the Trans Mountain Expansion (TMX) project and to a liquefied natural gas terminal in Nova Scotia are both recent examples of lost opportunities to bring Canada’s resources to foreign markets, which ultimately hurt Canada’s relationship with its allies.

“Let me be clear: I’m in no way suggesting that we should do away with stringent environmental regulations and the requirement to obtain approval from affected communities. But it’s pretty hard to build something when the rules keep changing,” he said.

Describing nation-building projects as the “thread that sews the country together” in the face of increased regionalism and polarization, Hyder said he has called upon the federal government to streamline the regulatory approval processes for certain types of major projects, particularly those focused on decarbonization. He also told how a coalition of leaders called the Coalition for a Better Future is looking at ways to drive Canada’s economic growth and progress on inequality and climate change.

“If we can’t build things, people lose trust and confidence in our institutions,” he said. “Things need to change. This is not just about letting down our allies, we’re letting ourselves down, we’re letting the next generation down.”

Leading with a sense of purpose

His call to action for the leaders of today and tomorrow is to commit to creating a better future for Canada and the world and to build the relationships, movements, coalitions, and the infrastructure that can pave the way.

“We’ve gotten away from the purpose of leadership, which is to do things and to take people somewhere – to give them a sense of purpose. This is a generational opportunity for Canada – and we can’t be the generation that squanders it,” he said. 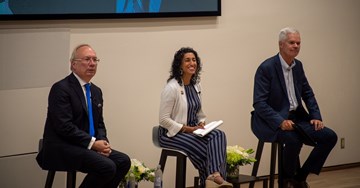 MBA Leadership Day inspires students to be the change 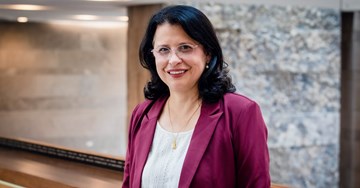 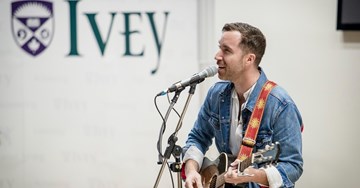