Thomas d’Aquino is an entrepreneur, corporate director, author and philanthropist. He is the Chairman of Thomas d’Aquino Capital, the Chairman and CEO of Intercounsel Ltd., and the Founding CEO of the Business Council of Canada. He is the Founding Chairman of the Lawrence National Centre for Policy and Management Advisory Council and is an Honorary Professor of Ivey Business School. He holds a number of honorary doctor of laws degrees including from Western University.  He is the Canada Chair of the North American Forum and a Founding Director and Chairman Emeritus of the National Gallery of Canada.  Each year, Ivey hosts the Annual Thomas d’Aquino Lecture on Leadership which is now in its 14th year.  Mr. d’Aquino is a member of the Order of Canada and the Order of Ottawa. 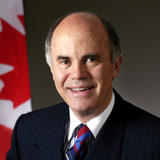