Armed with an Ivey business degree, these
alumni are changing hockey for the better

Armed with an Ivey business degree, these alumni are changing hockey for the better

There’s hardly a more prevalent phrase in business commentary today than “game changer.” Whether in talent acquisition or product development, highly anticipated new arrivals are given this label with considerable fanfare. The implication is that a particular market or even an entire sector is about to tilt on its axis, even though only a select few in either category go on to truly live up to the billing.

But for a growing cohort of Ivey alumni, the description is less a cliché and more a statement of fact. From a defenceman in the U.K.’s premier hockey league and a rising star in the women’s professional game to the CFO of Maple Leaf Sports and Entertainment (MLSE) or the youngest general manager of an NHL franchise, graduates of the School’s HBA, MSc and MBA Programs are changing the game.

Collectively, they are taking every opportunity to improve the game and take it to a broader audience globally. From how and where hockey is played, how it is analyzed, and the manner in which it is marketed and consumed, there’s no area of the game that this group hasn’t impacted. Their success is due, at least in part, to the lessons learned in the Ivey classroom, on international study trips or in the Case-Method of Learning, and in the alumni connections they built during their time at Ivey.

Hockey is just one of many career paths available to you through our programs. Find out more about where an Ivey degree can take your career.

On the ice, Scott Aarssen, HBA ’12, and Sydney Kidd, MSc ’17, are pioneers of sorts. Aarssen is a veteran defenceman for the Sheffield Steelers, one of the leading clubs in the U.K.’s Elite Ice Hockey League. Despite playing in a non-traditional hockey market, Aarssen says the high level of expectation at a club like Sheffield is ideal for an Ivey grad.

“It’s the big team in the league and I feel like the spotlight is always on us,” Aarssen says. “It’s similar to Ivey in that, if you’re that type of person, you enjoy pressure situations and you want to thrive in those situations, and that’s what makes you better.”

Kidd also relishes the idea of taking the game to new audiences as she looks forward to an upcoming trip to China. There, she will play for the Toronto Furies as part of the Canadian Women’s Hockey League’s expansion into Asia. Making the Furies squad this season marks Kidd’s second professional contract, following a season with the New York Riveters of the U.S.-based National Women’s Hockey League.

That the current model for women’s hockey requires most players to have another job off the ice – hers being in management consulting at global strategic innovation and experience design firm Idea Couture – only adds to Kidd’s respect for her teammates.

“I think it's pretty incredible that the women I play beside do both,” she says.

Kidd adds that the time-management balancing act that this entails is made all the more worthwhile by the thought of being an inspiration to youth players looking to forge a career in the game. “I think about working all day and then being at the rink until midnight, and how exhausting that can be,” Kidd says. “But there’s that extra little push of seeing little girls at the rink in your jersey and being so excited to one day play professional hockey, and being able to one day achieve that goal.”

Dave Barrett, MBA ’04 and PhD ’14, and his co-coach and then faculty colleague Chris Higgins, Professor Emeritus of Information Systems, coached Kidd and the Mustangs to the CIS title in 2015. 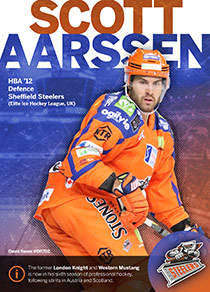 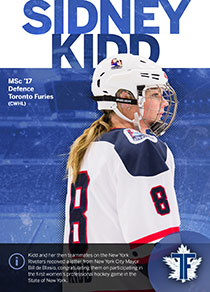 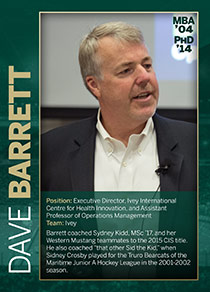 Off the ice, Ivey grads are also having a major impact on key performance metrics at the game’s highest level, which in turn is changing coaching, scouting and player development.

To describe John Chayka’s, HBA ’14, rise in hockey management as “meteoric” seems more understatement than hyperbole. Within a year of graduating from Ivey, Chayka was named General Manager of the Arizona Coyotes, becoming the youngest GM in NHL history.

Leading hockey pundits clearly approve of what Chayka is trying to accomplish in making “big data” and real-time video central to performance analytics, similar to the “Moneyball” revolution in baseball. Sports Illustrated listed Chayka’s initial appointment as the Coyotes’ AGM as “one of the NHL’s 10 smartest off-ice hirings of the 2015 off-season.” Canadian Press has referred to him as the “Mark Zuckerberg of the NHL,” while The Hockey News dubbed him a “whip-smart millennial.”

Chayka’s work in Arizona has also had an indirect impact on the careers of fellow alumni Jake Goldberg, Law/HBA ’14, and Colin MacDonald, HBA ’17. When Chayka appointed Goldberg as the Coyotes’ Director of Hockey Operations in May 2017, MacDonald assumed Goldberg’s previous role as Assistant General Manager of the OHL’s London Knights.

MacDonald shares an Ivey HBA background with Chayka and Goldberg, and brings a wealth of playing experience to his AGM role – albeit for one of the Knights’ rivals. The former captain of the Plymouth Whalers (now the Flint Firebirds) followed his four years in the OHL with two OUA seasons for the Mustangs.

MacDonald says his years playing elite-level hockey was the ideal preparation for Ivey, which in turn has served him well in transitioning to the competitive nature of managing at one of the top clubs in the OHL.

“I was constantly surrounded by people who were pushing themselves to be better and to compete with each other, and that didn’t change when I went to Ivey. You’re surrounded by a lot of bright individuals who want to do well in their careers. So I think having those two experiences helped in joining the London Knights, where we’re a team that’s expected to win.”
—Colin MacDonald, HBA ’17, AGM of the London Knights

As the NHL’s new breed of analytics gurus, Chayka and Goldberg constantly draw on the technical skills they learned at Ivey. But Chayka adds that the “softer” people skills are equally as important to his success.

“The hockey industry is a highly-public industry, and I think Ivey teaches you to communicate in the public sphere very well,” he says, speaking backstage at Ivey’s 2017 O-Week Gala Breakfast, where he was the keynote speaker. “So I think there’s a lot of preparation that you learn at Ivey that lends itself to the hockey industry.”

Chayka was similarly candid with the HBA1 students when discussing what he considers the biggest challenge in his current role.

“In Arizona, I’m trying to sell hockey in a desert. It’s almost an oxymoron.”

Ivey has also been the place where former players have chosen to start building the foundations of their post-hockey careers. 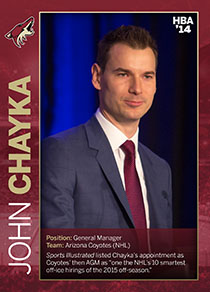 In this, Chayka has an unlikely ally in MLSE CFO Cynthia Devine, HBA ’87. The unique form of “coopetition” found in pro sports is still somewhat new to Devine, especially when she thinks of her recent career path of similar roles at Tim Hortons and RioCan. Just over halfway through her first year overseeing the financial performance of one of the world’s largest sports and entertainment portfolios – which includes the Coyotes’ NHL rivals, the Toronto Maple Leafs – Devine sees the importance of on-ice competitors working together off the ice.

“Even though you compete fiercely on the ice, you actually work very closely with the league and the other teams to try to grow the sport and improve the overall financial performance of the league and the sport in total,” she says. Devine adds that the group focus of many HBA projects at Ivey provides a good foundation for this type of high-level, multi-stakeholder discussions, which are integral to success in any sector.

“Ivey really gives a great opportunity for you to listen to others, be open to other ideas, build on people’s ideas, and realize the kind of value that comes from working together and sharing ideas, to come up with a much better solution. I think Ivey really started casting that in stone for me, and it’s another thing that I’ve carried throughout my career.”
—Cynthia Devine, HBA ’87, CFO of MLSE

For Dario Zulich, HBA ’86, hockey is a key pillar of his plan for the economic revitalization of Greater Sudbury. Zulich acquired the OHL’s Sudbury Wolves from Mark Burgess, MBA ’88, as part of his plan to build a new sports and entertainment centre that would see tourism play a bigger role in the local economy. He says that MLSE serves as something of a template for him to work toward, albeit on a smaller scale.

“I aspire to that model and I look up to that,” Zulich says. “So it wasn’t by design, but rather by being open to possibilities that got me into the hockey business.” 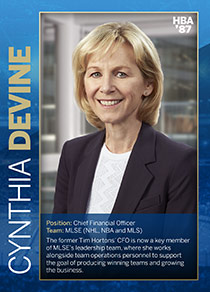 Perhaps no one appreciates the multifaceted nature of MLSE’s operations more than Karin Adams (nee Koopmans), HBA ’06 & MBA ’14. Among her many responsibilities as Senior Director of Total Rewards, Adams’ focus is on building a compelling employee value proposition for all employees across MLSE’s business divisions.

“As we continue to grow the breadth of our portfolio, it has different demands on the talent needs the organization has,” Adams explains. “It changes where we need to be looking for talent and what we need to be doing in order to recruit and retain them.”

Adams’s work in Total Rewards for MLSE doesn’t include player contracts. But if it did, she would likely be squaring off with Mark Guy, HBA ’96. As a senior certified player agent and member of the management team at Newport Sports Management, Guy has negotiated for the some of the game’s biggest stars, including Drew Doughty, Steven Stamkos, Correy Perry and PK Subban. 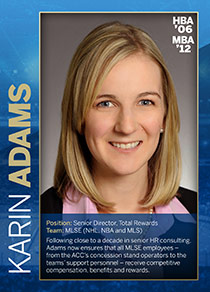 While much of the forecasting on the business side of hockey is typically season-to-season, Kidd for one isn’t afraid to train her sights on a not too distant horizon. One that combines her love of hockey and her international business skillset to help make the women’s game more viable for future generations.

“The revenue model and the entire system is based on the men’s game,” Kidd notes. “So you’re just trying to mimic how they make money and how they pay players, but on a much smaller scale. But I think there are opportunities to redesign the business model for women to change revenue streams or see what ‘white spaces’ are out there to capture.”

Striving to capture their respective “white spaces,” Kidd and her fellow alumni working throughout hockey are bridging the singular focus of a player’s success with the longer-term vision necessary for business success. And while their organizations may face off against one another from time to time, these Ivey grads are united in at least one common goal – changing the game for all who enjoy it.