Ivey celebrated its 100-year legacy of real-world leadership by looking ahead to ways it can magnify its impact on business and society in the next century.

At the School’s 100th-anniversary kick-off event on January 17, Dean Sharon Hodgson unveiled the official centennial logo – the number 100 with zeros resembling cogs of a wheel. The logo was displayed in the Grand Hall of the building and emblazoned on special Ivey caps donned by faculty and staff at the event. Hodgson also announced the 100th-anniversary marketing campaign, fittingly called “The Future We See.” The campaign features Ivey faculty, staff, students, and alumni reflecting on the future and will appear online, in publications, and at prominent locations in various cities throughout the year.

“As we celebrate a century of innovation and leadership at our business school, we acknowledge that Ivey is a huge part of Western’s past and future success,” said President Alan Shepard. “We look forward to building on that proud legacy and continuing to make the most of the vital contributions Ivey makes to our wider campus community.”

The future for Ivey

Encouraging attendees to participate in the campaign, Hodgson shared her vision for the School’s future. Hodgson said she sees a future where Ivey will innovate learning while offering the best business education, lead dialogue on critical issues and develop research to move these issues forward, and become a lifelong partner in its community’s success.

“The future I see is full of promise and opportunity,” she said. “We’ll be an organization dedicated to lifelong learning for ourselves and for our alumni. And I see the Ivey community leading global change.”

Hodgson outlined the many ways Ivey staff, faculty, and alumni can give back to the community through upcoming centennial activities. This includes planting 100 trees with ReForest London, or participating in volunteer initiatives in locations around the world for the School’s annual Global Ivey Day on May 11.

“One of the really great ways that we are acknowledging our anniversary is to give back to the community in ways that exemplify our purpose and mission,” said Hodgson. “While we mark the day here in London, alumni around the world are being challenged to do something to give back in their local community, multiplying our impact.”

Hodgson revealed other ways the School will mark the milestone and share its history with the local community, which include:

Calling the centennial a “pivotal point in time,” Hodgson acknowledged Ivey’s strong legacy of teaching, research, and outreach and its distinction as first in Canada on many fronts. This includes:

Citing Ivey’s growth over the years, Hodgson said one constant remained: the School’s unique and transformational student experience based on case-method learning that prepares future leaders for real-world business decision-making. She noted that one in two Ivey alumni hold senior leadership positions with their organizations.

“Today, the real-world case-method approach to business education that distinguished Ivey in its pioneering years is as strong as ever and continues to differentiate Ivey graduates,” she said.

Moving into the next century

Hodgson told how the new Ivey Next strategy will build on that legacy and form the foundation for the next 100 years. The strategy challenges Ivey to address critical issues facing business and society and includes the new purpose, “Inspiring leaders for a sustainable and prosperous world.”

“We are very much looking forward to the next century with renewed purpose,” she said. “The energy in this room today inspires me even more. I’m so excited to write the next chapter of the next 100 years with you.” 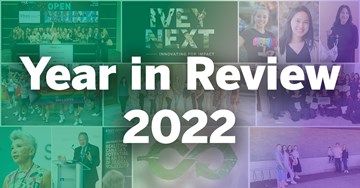 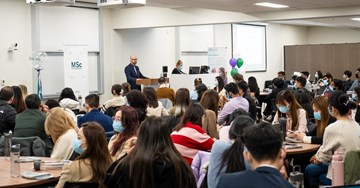 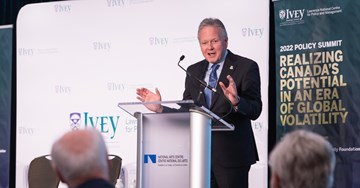