Virtual Panel Event: The State of the Canadian Oil and Gas Industry

We have all heard about the astonishing challenges Canada’s energy sector is facing. What will the coming months and beyond look like for the oil, gas, and pipeline sectors as the COVID-19 virus reshapes how we live, work and consume energy? How will the pandemic and economic recession shape the development of new hydrocarbon and infrastructure projects, and Canada’s role in global energy markets? What are the implications for energy transition, environmental policies, and Indigenous participation?

Where Do We Go From Here? 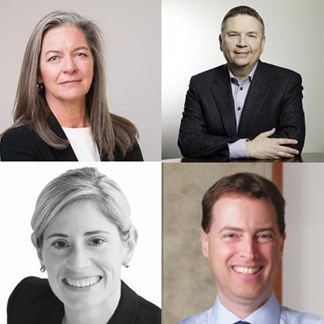 Join Canadian Club Toronto, in partnership with the Ivey Energy Policy and Management Centre at Ivey Business School and The Ivey Academy, on May 14 for a discussion of the state of the oil and gas industry in Canada with expert panelists Martha Hall Findlay (Suncor), Gordon Lambert (former CEO, Alberta Energy Regulator), and Samantha Stuart (TC Energy) in a conversation moderated by Professor Guy Holburn.

Martha Hall Findlay is a corporate lawyer, senior business executive and successful entrepreneur, with more than 25 years of domestic and international experience with major multinationals as well as start-ups, primarily in telecommunications and technology.

Before joining Suncor as Chief Sustainability Officer, Hall Findlay was President and CEO of the Canada West Foundation. She has served as Executive Fellow with the University of Calgary’s School of Public Policy, and she was Chief Legal Officer at EnStream LP, a mobile payment joint venture of mobile providers Rogers, Bell and TELUS.

Hall Findlay’s insights on critical issues such as pipelines, international trade, foreign investment, energy and the environment, and supply management have framed the national debate. Her numerous connections to the West include service on the boards of Alpine Canada and Alberta’s CKUA not-for-profit radio network. She has also served on several boards and advisory councils related to policy, resources and the environment.

She served as a member of Parliament from 2008 to 2011, and as a member of the House of Commons Standing Committees for Finance; Transport; Government Operations and International Trade. She launched her 2013 campaign for the leadership of the Liberal Party of Canada in Calgary.

Gordon Lambert has been engaged in business and sustainability in the energy sector for 40 years. From November 2018 to April 2020 he served as the CEO of the Alberta Energy Regulator (AER). For 17 years he lead Suncor Energy’s sustainability strategy, innovation and embedding efforts retiring in January 2015. He was central in the creation of Canada’s Oil Sands Innovation Alliance (COSIA), involving a globally unique collaboration model, that has resulted in the sharing of 1.3B$ of intellectual property to accelerate environmental performance improvement.

In 2015 he was appointed by the Premier to the 5 person Panel that designed the Alberta Climate Leadership Plan. In 2016 he Chaired the Alberta Climate Leadership Technology and Innovation Task Force, with 1.4B$ in carbon levy revenue being committed to innovation as an outcome. He is currently a Board member of Alberta Innovates. He also serves on the Export Development Canada CSR advisory council and as the Suncor Sustainability Executive in Residence at the Ivey Business School prior to his AER CEO assignment.

He previously served on the Joint Public Advisory Committee to the ministerial Commission for Environmental Cooperation under NAFTA.

He has an Honors Bachelor of Science degree from the University of Guelph and completed the Executive Program at the Ivey School of Business in 1997.

Samantha Stuart is Vice President of Corporate Strategy and Development at TC Energy, one of North America’s premier publicly traded energy infrastructure companies, with operations in the US, Canada and Mexico. Prior to TC Energy, she joined the Energy and Private Equity practice of McKinsey & Co. serving global asset managers, private equity firms and energy companies seeking to improve portfolio performance, expand into the energy sector, address structural change due to price volatility or adopt landmark innovation to unlock greater value. As part of the founding team of a several large oil and gas companies (publicly listed), Ms. Stuart has also been an active entrepreneur.

Guy Holburn is Professor of Business, Economics and Public Policy, and Director of the Ivey Energy Policy and Management Centre at Ivey Business School, Western University. His research and teaching focuses on regulation, governance and strategy issues in the energy and utilities sectors. He has published widely in top peer-reviewed academic journals, and authored more than a dozen reports on provincial and federal energy policies. Dr. Holburn has served as an expert consultant and advisor to governments and companies in Canada and the U.S., and he serves as a director of London Hydro. He holds a Ph.D. and M.A. from the University of California, Berkeley, and a B.A. Hons. (First Class) from Cambridge University. Previously Holburn worked for several years as a management consultant for Bain and Company in England and in South Africa.