The Future of Energy Security in Canada 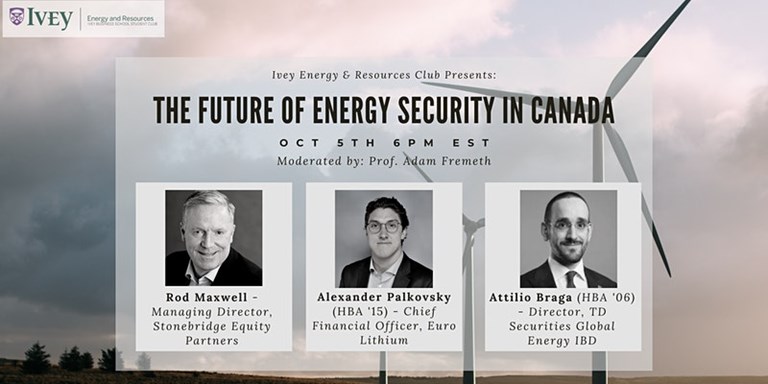 As Canada shifts towards renewable energy, are we sacrificing too much of the economical benefits and reliability fossil fuels currently provide? Or, in the long-run, are renewables going to pay-off? Will Canada be a dominant player in the renewable energy industry, creating job-growth as well as increasing energy independence?

The Ivey Energy & Resources Club will host an expert panel discussion over Zoom to hear what the experts think about the complex issues facing Canada's energy sector. Professor Adam Fremeth will moderate this important conversation.

Rod Maxwell is the Managing Director of StoneBridge Equity Partners which he co-founded in 1996.   StoneBridge is focused on investing in Canadian private businesses.  Rod has invested in and served on the board for a variety of private and public companies in the junior land based as well as off-shore exploration and production industry together with oil and gas energy services businesses.

Alexander Palkovsky (HBA '15) is Chief Operating Officer and Chief Financial Officer at EuroLithium. After graduating from the Ivey Business School in 2015, Alexander spent two years leading the development and financing of over $50M of solar energy projects in Canada. Alexander then spent a year and half as an Associate of Brookfield Renewable’s Capital Markets and Operations teams. Through his collective efforts, he was awarded the Emerging Leader in Solar Award in 2017, and the Ivey Emerging Leader Award in 2014. Alexander formally joined Euro Lithium in April 2019.

Attilio Braga (HBA ‘06) is a Director in TD Securities' Global Energy investment banking group, based in Calgary. He covers a variety of Canadian and US corporate and financial sponsor clients, primarily focusing on energy infrastructure (utilities, power generation, export terminals, pipelines and midstream) as well as petrochemicals and upstream.

Adam Fremeth (HBA ‘00) is the E.J. Kernaghan Professor in Energy Policy and Associate Professor of Business, Economics, and Public Policy at the Ivey Business School. His research focus is on how firms engage and respond to public policy, with particular attention to regulated utilities and the upstream oil and gas sector. Ongoing research projects include how firms engage with First Nations communities through the application of Impact and Benefit Agreements, the role of activist groups on regulatory rulings in the electric utility sector, and the patterns of personal campaign contributions by Chief Executive Officers. He received his MA from Carleton University and his Ph.D from the University of Minnesota.