Ted Kernaghan (pictured left) sees major energy projects in much the same way that Sir John A. Macdonald viewed a transcontinental railroad. That is to say, more as a nation-building exercise than merely the development of large-scale infrastructure.

Kernaghan’s keen interest in how energy projects are decided, financed, and completed dates back more than 50 years, when he spent five years as an oil analyst. From his in-depth analysis of the Churchill Falls contracts finalized in the late 1960s through to following this year’s inter-provincial feuding over the proposed Trans Mountain Pipeline, Kernaghan feels Canada needs to do a better job of bringing major energy projects to fruition, in a manner that is equitable to all impacted jurisdictions.

“Seeing a distinguished alumnus come back and recognize that the School continues to take a leading role in the Canadian economy is an important sign for all of us who are working on these types of issues.” —Adam Fremeth, HBA '00, E.J. Kernaghan Chair

“In my view, there’s an opportunity to make improvements in the way we’re behaving,” Kernaghan says. “I really think policy, academic research, and communication should be able to play a significant role.”

Speaking from the Toronto office of Kernaghan & Partners Ltd., the full-service brokerage firm he founded with his son Edward Kernaghan and where he still serves as Senior Investment Adviser, Kernaghan says he decided to support the Ivey Energy Centre after attending an Ivey Idea Forum.

“People are generally apprehensive about business’s profit motives and the way that we behave,” Kernaghan says. “So if business people have a strong voice with background and academic independence that should be helpful.”

Professor Adam Fremeth, HBA ’00 (pictured right), was appointed to the inaugural E.J. Kernaghan Chair in April, for an initial four-year term. Fremeth is an Associate Professor in the business, economics, and public policy area and joined Ivey full time in 2009. He has contributed to Ivey’s impact on energy policy at the federal and provincial levels, which led to Ontario’s 2017 “smoothing” of generation costs and the implementation of Ivey recommendations to the National Energy Board Modernization Project.

Fremeth says the gift to support the chair and research fund is an affirmation of the Energy Centre’s ability to connect academic research to the challenges of practitioners and policy-makers.

“Seeing a distinguished alumnus come back and recognize that the School continues to take a leading role in the Canadian economy is an important sign for all of us who are working on these types of issues,” Fremeth says. “I think we’re contributing to the Canadian discussion and helping to elevate the quality of that conversation, either on the academic side or on the more practitioner-oriented work we do with executives and policy-makers. This bodes well for the future of our economy and Ivey’s role in it.”

Another motivating factor for Kernaghan in making the gift was that he considers this a pivotal time in Canada’s relationship with large-scale energy projects. “I think now to 2020 will be important for Canada in discussing and understanding the implications of the Paris Agreement and how Canadians feel about it,” Kernaghan notes. “And how we deal with energy is going to be critical.” 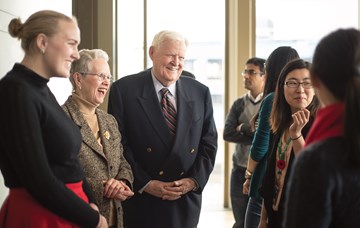 Delivering on a Vow 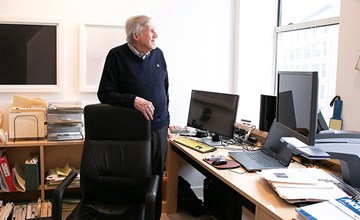 The Human Capital of the Future 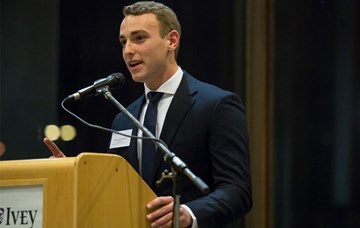 Celebrating the Impact of Scholarships & Awards