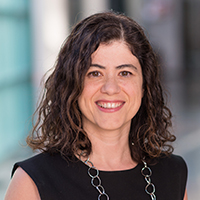 Franca Gucciardi is the CEO of the McCall MacBain Foundation, an organization that focuses on education and scholarships, health, and climate change and the environment. The Foundation recently gave single-largest gift in philanthropic history ($200M) to establish the McCall MacBain Scholarships at McGill – the first comprehensive graduate scholarship program of its kind in Canada.

For 13 years prior to this role, Franca served as the CEO of the Loran Scholars Foundation, a charity that identifies and supports exceptional young Canadians who demonstrate character, service and leadership. Before leading Loran, Franca was the Founding Director of Canada’s Millennium Excellence Awards. She has also worked at the Ontario Legislative Assembly, Brampton Caledon Community Living, and TVO. Franca is currently the CEO of the McCall MacBain Foundation.

In the community, Franca is a board director for Enactus, an organization that supports students’ entrepreneurial endeavours to improve lives. Franca also holds advisory board roles with Guelph Arrell Food Institute, Waterloo, and Ivey's Ihnatowycz Institute for Leadership.

Franca obtained a BA from the University of Waterloo as one of the first Loran Scholars to be selected in 1990, and has a MA from Carleton University’s Norman Paterson School of International Affairs. She completed the Strategic Perspectives in Nonprofit Management Program at Harvard Business School and holds the Chartered Director designation from The Directors College.

In 2013 Franca was one of 33 women named a Fellow of the International Women’s Forum. She is the 2015 recipient of the Gil Bennett Gold Standard Governance Award and the Sara Kirke Award for Entrepreneurship and Innovation.