In the summer of 2009, Ivey Business School assembled a multi-disciplinary faculty team to host candid discussions with more than 300 senior business, public sector and not-for-profit leaders from across Canada, New York, London, England and Hong Kong to examine the true state of leadership in the 21st century.

The research group of Ivey Professors Jeffrey Gandz, Mary Crossan and Gerard Seijts and Ivey Dean Carol Stephenson discovered a powerful consensus that a failure in leadership was indeed a root cause, and that it was not confined to organizations or leaders at the epicentre of the crisis. Public and private sector, regulators, central banks, Wall Street and Main Street companies, institutions responsible for leadership and governance education and theory - all shared responsibility.

The result was a book called Leadership on Trial, which, among other important outcomes, defined the direction of research for the Institute in the areas of leader competencies, character and commitment.

Read the book that was the catalyst for the research on leader character. Place your order by emailing leadership@ivey.ca.

Watch a webcast of the launch of Leadership on Trial. 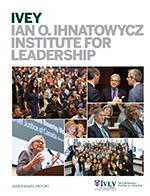 Read the Leadership Institute’s annual report highlighting the events of the past year.