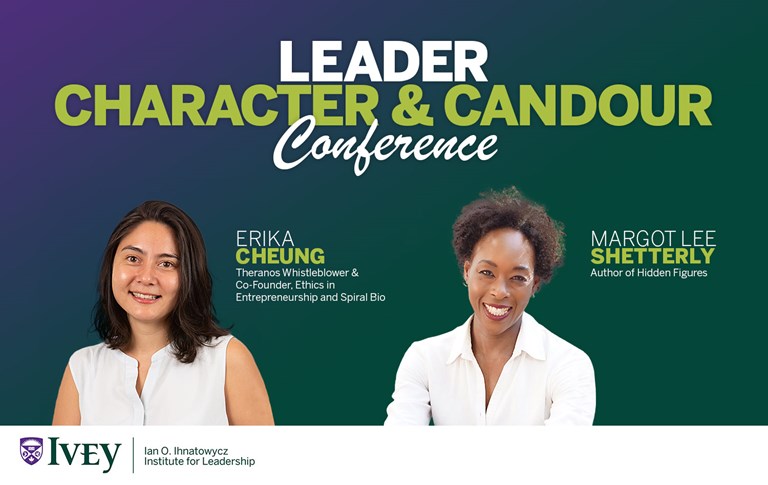 *This event is for Ivey HBA1 students, faculty & staff.

The Institute for Leadership will be hosting the 9th Annual Leader Character & Candour Conference for the HBA1 students on Wednesday February 9. The event includes leaders who will deliver compelling messages about the importance character and candour in our professional and personal lives.

Erika Cheung was one of the key whistleblowers that reported Theranos – a Silicon Valley blood testing start-up founded by Elizabeth Holmes – to health regulators. Her report subsequently led to the shut down of Theranos' clinical lab, which prevented the company from providing false medical results to thousands of patients. Cheung recently spent hours on the stand testifying against  Holmes’ during her criminal trial; she detailed for the court the failure rate and data manipulation she witnessed with Theranos’ key blood lab machine, as well as the threatening letters and surveillance she experienced after she left the company.  Elizabeth Holmes was convicted on four counts of fraud and conspiracy, ending a lengthy trial that captivated Silicon Valley (and the world). As a recent headline said - Elizabeth Holmes guilty: Now Erika Cheung is the name we should know with the advice we should hear.  I very much encourage you to read the article. Erika holds a dual degree in Linguistics and Molecular and Cell Biology from UC Berkley. She is the co-founder and executive director of the not for profit organization Ethics in Entrepreneurship that advocates for ethics in the tech industry.

Writer, researcher, and entrepreneur Margot Lee Shetterly is the author of Hidden Figures: The American Dream and the Untold Story of the Black Women Mathematicians Who Helped Win the Space Race (William Morrow/HarperCollins) which instantly became a #1 New York Times bestseller. Margot sold the movie rights while still working on the book, and its film adaptation of the same name, Hidden Figures (2016), became a number one movie in the US. It was nominated for several awards, including three Oscar nominations (Best Picture, Best Adapted Screenplay and Best Supporting Actress for Octavia Spencer). Margot is also the founder of The Human Computer Project, an endeavor that is recovering the names and accomplishments of all of the women who worked as computers, mathematicians, scientists and engineers at the NACA and NASA from the 1930s through the 1980s. She has also worked in investment banking and media startups.