I was raised in an agribusiness family in Uxbridge, Ontario. My great-grandfather introduced the sustainable concept of permanent pasture to Canada after escaping the Holocaust, and founded one of the world’s largest seed companies; sustainability is in my bloodline.

I have worked in many industries including non-profit, banking, and arts, and have been active in politics, theatre, and business since my early teenage years. I am an intersectional feminist and activist involved in direct action. My career goals have varied throughout my life, but, at the end of the day, I have one ultimate goal: improving the world around me.

What is your personal definition of sustainability?

Sustainability concerns putting forward the best effort possible to employ a healthy, environmentally conscious lifestyle, aimed at maintaining the planet’s natural environment, beauty and resources. Sustainability goes well beyond donating money to organizations, but rather, it is a grassroots way of life. Sustainability can be something as small as meatless Mondays, or as large as launching a climate-focused social impact business.

Sustainability is so much more than merely eradicating plastic straws. Sustainability’s accessibility problem could easily be mitigated if people saw it for what it was: every individual doing what is in their means to make a tangible impact.

What role do you see sustainability playing in your professional career?

My first career aspiration as a young child was to “stop people from cutting down the Amazon”, and while I know this is an unrealistic career goal as an adult, I still envision sustainability as a major factor in determining my future career.

I currently have plans to attend law school following my graduation from Ivey, and I hope to practice environmental or human rights law. I have felt truly empowered in the climate activism sphere, and being able to translate that empowerment into a strong career path, and ultimately empower others, is critically important to me. Most importantly, I’ve always had a very strong sense of social and environmental responsibility as a global citizen; it seems a rational and important progression to pursue a sustainability certificate and gain valuable insights from those already in the industry.

Ultimately, after practicing law, I hope to return to university to complete a Ph.D. in Literary Theory, and teach ecocriticism and feminist theory. Completing the sustainability certificate early in my academic career would offer an important vaulting point for my future, and inform my own career in academia from a perspective other than the humanities focus that I’ve had thus far.

What sustainability projects have you been engaged in?

Sustainability has been a part of my life since I was a young child. I was the president of my elementary school’s EcoSchools team, and successfully led the team to three years of EcoSchools Platinum certification. I later returned to my public school and taught workshops that I created on sustainability to instill sustainability in students from a young age.

In terms of personal projects, I’ve been a vegetarian since age twelve in an effort to reduce my own emissions. I have also been imperfectly attempting Zero-Waste for the past two years, as well as shopping local and organic for my groceries.

The summer between my first and second year, I was one of five students at Huron University College to complete an independent, fully funded research fellowship. I focused my efforts on exploring the differences between Small-Producer and FairTrade agriculture.

I am a member of the Vegan Society and actively encourage a dietary shift in favour of the planet; I completed Advanced Theory in Ecocriticism, focusing my studies on performative ecology and vegan feminism, while also connecting the course with Zero-Waste stakeholders in London. I have also been involved in direct action demonstrations for animal rights and climate change. 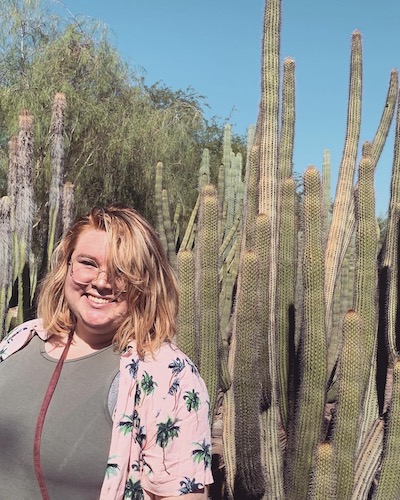