This report explores the issue of counterfeit, the effectiveness of current strategies versus blockchain solutions, and the role of government in creating policies conducive to blockchain adoption.

'At the Very Beginning, There's This Dream' The Role of Utopia in the Workings of Local and Cryptocurrencies

Arjaliès, Diane-Laure. 'At the Very Beginning, There's This Dream' The Role of Utopia in the Workings of Local and Cryptocurrencies (January 16, 2019). In the Palgrave “Handbook of Alternative Finance,” edited by Raghavendra (Raghu) Rau and Robert Wardrop. Available at SSRN: https://ssrn.com/abstract=3317121

Since the 2008 financial crisis, the number of alternative currencies aiming at transforming global financial institutions, such as local and complementary currencies (LCC) and cryptocurrencies, has exploded. Yet the motivations and workings of such monies are relatively unknown. This chapter aims to fill this gap by providing a framework that uncovers the ideals pursued by alternative currencies, and the effects of those ideals on the production of money.

The internal and external governance of blockchain-based organizations: Evidence from cryptocurrencies

2018. The internal and external governance of blockchain-based organizations: Evidence from cryptocurrencies. In Campbell-Verduyn M (ed.), Bitcoin and Beyond: Blockchains and Global Governance. RIPE/Routledge Series in Global Political Economy (with YY Hsieh and S Wang)

This paper proposes a competitive theory of trust to show digital currencies and cryptocurrencies functioning as alternative providers of trust during institutional trust ambivalence. We argue and show that some government policy decisions cause trust ambivalence resulting into alternative providers gaining more relative trust - the further away they are from the state agencies the more trustworthy they become.

Bitcoin and the Rise of Decentralized Autonomous Organizations

Bitcoin represents the first real-world implementation of a “decentralized autonomous organization” (DAO) and offers a new paradigm for organization design. Imagine working for a global business organization whose routine tasks are powered by a software protocol instead of being governed by managers and employees. Task assignments and rewards are randomized by the algorithm. Information is not channeled through a hierarchy but recorded transparently and securely on an immutable public ledger called “blockchain”. Further, the organization decides on design and strategy changes through a democratic voting process involving a previously unseen class of stakeholders called “miners”. Agreements need to be reached at the organizational level for any proposed protocol changes to be approved and activated.

How do DAOs solve the universal problem of organizing with such novel solutions? What are the implications? We use Bitcoin as an example to shed light on how a DAO works in the cryptocurrency industry, where it provides a peer-to-peer, decentralized and disintermediated payment system that can compete against traditional financial institutions. We also invite commentaries from renowned organization scholars to share their views on this intriguing phenomenon.

The very mention of robo-advisors seems to strike fear in the heart of the financial services industry, and comes with a popular narrative that suggests these are actual robots that not only look like humans, but are here for their jobs. There’s also a sense that these “machines” require science-fiction grade technology, which will be impossible to regulate.

The goal of this paper is to take stock of the current situation in Canada with regard to the digitization of advice and start to define a way forward. We sought to move away from the misleading descriptor “robo-advice,” and toward a new, more actionable model. It was our working assumption that there was room for all sides to come together as the financial advice field evolved, and to create a digital structure that would make use of the best both humans and machines had to offer. To further the discussion around digital advice and its role within the wealth management industry, we also felt it was important to begin to build a framework for its execution. 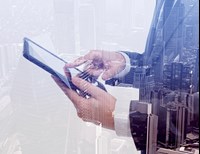 Categorical anarchy in the UK? British media’s classification of bitcoin and the limits of categorization

2017. Categorical anarchy in the U.K.? British media’s classification of bitcoin and the limits of categorization (with G. Swain). In Research in the Sociology of Organizations (From Categories to Categorization: Studies in Sociology, Organizations and Strategy at the Crossroads). Published online: 27 Mar 2017; 185-222

Bitcoin, introduced in 2009, is a complex entity whose evolving design and purpose are constantly redefined in a decentralized fashion. This makes bitcoin difficult to categorize, and indeed since 2009 bitcoin has been associated with 112 different labels in the British media alone (e.g., “private money”, “asset”, “commodity”) — most of which fail to adequately describe bitcoin. Contrary to expectations, the introduction of new labels meant to encapsulate bitcoin’s unique attributes is rare. By analyzing labels in 674 articles published in the U.K. between 2009 and 2015, we shed new light on the relationship between labeling and categorization, and explain the ongoing confusion faced by the media and their audiences when it comes to bitcoin. In particular, we identify classification inconsistencies at three levels (within clusters of labels, between labels and categories, and between label attributes), which hamper categorization based on attribute similarity, audience goals, and causal models (respectively). We contend that four contextual elements nurture this categorical anarchy: radical innovation, decentralization, nonintersection of knowledge domains, and absence of a superordinate category. We discuss implications for theory on categorization and innovation, and we conclude this paper with a call for more research on the socioeconomic revolution heralded by bitcoin and the blockchain.

Are interactions using technology equivalent to interacting with another person face-to-face?  When it comes to assessing generosity and cooperativeness this research finds that interactions mediated by even high quality  video + audio are not as effective as face-to-face.  Completely replacing human interactions with technology may have a negative impact upon customer and other relationships.